Now’s the time when I look forward to cozy dinners of substantial food and hearty red wine. Soups, stews, one-pot dishes and sweet or savory baked goods are warming, comforting and an affirmation of life amid the darkness.

The enjoyment begins days before the meal, while planning the menu. Where to start? Usually with just one dish. Often it’s the main course, but it could just as well be an appetizer, dessert or even a side, something that captures your imagination and intrigues you on some level. From there, it’s a matter of rounding out the menu with dishes that complement, contrast and provide a variety of tastes, textures and colors. That last — color — takes on added importance this time of year, when the world is so gray and in need of cheer.

Planning for this month’s menu began with the idea of a steak and oyster pie. I had never eaten one, but I do love the combination of steak and oysters in a carpetbag steak or a gumbo. Initially I thought of one large pie, but wound up making individual ones. To go with the pie I settled on a watercress salad dressed simply with olive oil and white wine vinegar to provide contrast, color and relief from the richness. Watercress is often served with steak, and for good reason.

The meal needs a vegetable, but I couldn’t think of one that would go well with the steak and oysters. The best solution was to serve the vegetable in the form of a soup, so the meal starts with a roasted butternut squash soup enlivened with chipotle chile pepper and enriched with freshly grated Parmesan.

The food is substantial without being overly rich, so a light fruit dessert seemed in order. I settled on one of my favorites — pears poached in red wine and served with a sauce made by reducing the poaching liquid. I like some sour cream with it, but that really is optional. A dry cookie would also go nicely here, if you find that appealing.

This is a simple menu, nothing complicated or difficult to execute, and it can largely be prepared in advance. The flavors in each course are intense and, I think, satisfying. Each course has eye appeal and vivid color — the deep orange of the soup, the bright green of watercress with the entree and the lovely burgundy of the dessert. 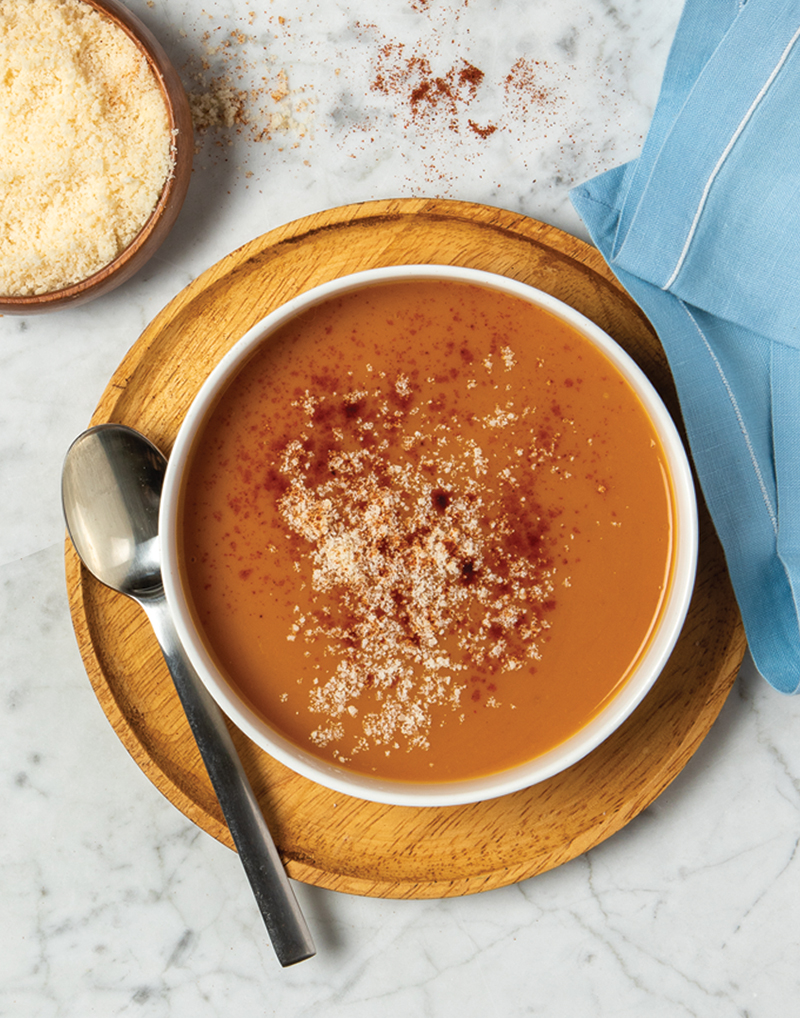 Toss squash and onions in olive oil to coat. Place on a sheet pan and roast until browned and softened, about 20-30 minutes.

Combine squash, onions and chicken stock in large pot. Bring to a boil. Puree with an immersion blender. Season with salt and chipotle chile pepper.

Separate watercress leaves from large stems. (Save large stems for a stir-fry.)

Whisk to combine olive oil and vinegar. Drizzle over watercress. Toss and season with salt and pepper. Makes 4 servings.

Brown beef in oil, in batches, without overcrowding. Remove with a slotted spoon and set aside. Add onion and cook until softened. Add beef stock and roux and stir to dissolve. Return beef to pot, season with salt, black pepper and cayenne. Cover and simmer, stirring occasionally, until tender, about 2-3 hours. Adjust seasoning.

Divide among 4 (8-10 ounce) baking dishes. (The recipe can be prepared in advance to this point.) Before baking, add 3 small oysters to each dish.

Whisk flour and salt in mixing bowl. Cut butter into small pieces and add to bowl, along with lard or shortening. Using a pastry cutter or your fingertips, mix fats into flour until it resembles coarse meal. Add water 1 tablespoon at a time, mixing it in with a fork, until dough forms.

Turn dough out onto a floured surface. Divide dough into 4 parts, form into discs and wrap each in plastic wrap. Refrigerate for at least 30 minutes.

Preheat oven to 400 F. On a floured surface, roll out a disc of dough so that it is a bit larger than the baking dish. Place dough on baking dish, turn under excess dough and fashion edge as desired. Repeat with remaining doughs and baking dishes. Place baking dishes on a rimmed baking sheet.

Using a pastry brush, glaze each crust with egg wash. With a sharp knife, cut vents in each crust. Place baking sheet with pies in preheated oven and bake until crusts are browned, about 30 minutes. Makes 4 individual pies.

Combine wine, sugar and cinnamon in a nonreactive pan.

Halve, core and peel pears. Add pears to pan, cut side down. Bring wine to a simmer and cook until pears are soft, about 15 minutes.Using a slotted spoon, remove pears to a serving dish.

Increase heat under the pan and boil until wine is reduced by half. Pour over pears. When cooled to room temperature, cover and refrigerate.

Serve pears and sauce in large, flat bowls with a dollop of sour cream in each bowl. Makes 4 servings.