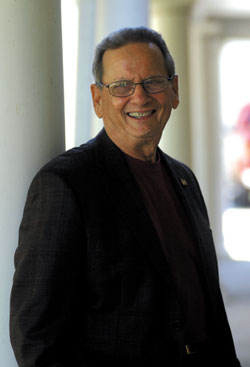 “When I was in the first grade I was the smallest person in school,” he drawls in a thick, southern Louisiana accent. “The seniors took a liking to me, and they used to pick me up and throw me around in the air. One day I wasn’t at school and everybody wanted to know what happened to the football. After that, everybody started calling me Football, even my mama and daddy.”

Seventy years later he’s not so small of stature but he’s just as ready to pitch in when help is needed. If only you can track him down. Call the Rosedale village hall where he’s serving his fifth term as mayor and a friendly voice on the line is likely to tell you, “Football was here this morning, but he’s gone now.” Dial home and Thelma, his wife of 53 years may say, “You just missed him. He went to an LMA meeting [Louisiana Municipal Association, which has him visiting mayors all over southern Louisiana]. Try his cell phone.” But the meeting’s started, so his cell phone is off. You would think that after 50 years in public life, Badeaux would be slowing down.

“When I get old maybe,” he quips.
Just reading the long list of his public service accomplishments would exhaust most people: assistant sergeant-at-arms for the state senate, 16-year board member of the Greater Baton Rouge Port Commission where he held every elected position including president, board member of LAMP (Louisiana Asset Management Pool), clerk of Rosedale for 23 years, mayor of Rosedale for five terms. But even that doesn’t tell the whole story. Badeaux is also a husband with eight children, so to supplement his meager public paycheck he worked other jobs as well to put food on the table.

“I always had a grocery store, or sold insurance or cars,” he says. “When I was mayor the first time, I was sales manager for Brockhoeft’s Chevrolet … and everybody came to the dealership to see me about village business.”

He must have been selling a few cars, too, because he made the Chevrolet Hall of Fame for eight years. Moreover, he’s been president of both the Maringouin and Grosse Tête/Rosedale Lions Clubs, Charter Grand Knight of the local Knights of Columbus Council and a member of the American Legion, Veterans of Foreign Wars and Disabled American Veterans.

Constant through the years has been his love and concern for the well-being of Rosedale, the little oak-shaded village on the banks of Bayou Grosse Tête where he was born and has spent his whole life.

Rosedale has seen a lot of changes during his tenure.
“We started from scratch, with nothing but dusty, dirty roads,” he says of the time shortly after the city’s incorporation in 1955. “Now we have paved roads, sidewalks, a first-class fire and police department, three mini-parks and a 14-acre park with a lighted walking trail.”

Badeaux’s passion for serving the community seems to have rubbed off on his children. Wade “Boobie” Badeaux spent 30 years as a volunteer deputy with the Rosedale Police Department, retiring just two years ago at 44. And son Randel, “Panco” Badeaux, 49, is serving a third term as alderman for the village.

“We’ve never had any knock-down, drag-out fights,” says Football Badeaux about working on village business with Panco. “We have our differences, but we know how to discuss them and decide what’s best for Rosedale.”

Panco Badeaux agrees. “He doesn’t take me for granted just because I’m his son. He treats me like he treats any of the other aldermen, and I treat him as the mayor, not as my father.”

Having a forum to help people is what Badeaux says has kept him involved in government all these years.

“When I was clerk, starting back in 1956, people would come in and ask for help. They didn’t know where else to go. A lot of people couldn’t read or write then so they would come to the clerk to assist them, and helping people just got to be part of my life.”

So what does Badeaux do when he’s not on official business?
“We like to travel a lot,” he says of he and Thelma. “Just about every year we take a big trip somewhere. This year we’re going to the Turks and Caicos Islands where Randel, Jr. [his grandson] lives.”

“I’m always looking for something to do,” laughs Badeaux. “So if you know of something that might be interesting, give me a ring.”

Just make sure you have all three of his phone numbers handy before you do.