Life at the End of the Road

The first time that I’m given directions to Pilottown, the secretary dispatching me to the weekly grocery delivery boat says: “First you drive to the end of the world. Then you get on a boat, and you just keep going.” 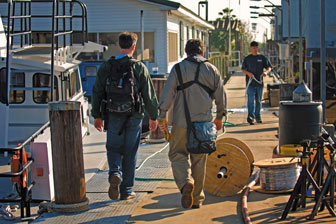 Six years later, you still get to Pilottown by driving to Venice, La., and taking a boat 10 miles downriver, but there’s less of a need for groceries there. This is a town whose permanent resident population, since the 1800s, has seen a high of about 500 and a pre-Katrina low of 8 and that now hosts only temporary residents who work there for anywhere from a few hours to a few weeks at a time.

Pilottown has always been accessible only by water or air, giving it an isolation that has contributed to the dwindling permanent population. It’s located in the marshes near the Head of Passes, where the river splits into three “fingers.” The houses, fishing camps and pilot stations were built on pilings and connected by a raised boardwalk that runs the length of the mile-long island. 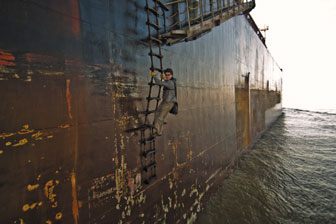 Beyond the boardwalk and before Hurricane Katrina, there were manicured lawns, homes with swamp boots and rocking chairs on the porches, pastures with cows, and even an alligator who had been returning to Milton Francis’ garden for more than four decades.

Many of Pilottown’s last eight permanent residents lived there through the Great Depression, World War II, and hurricanes Betsy and Camille. It wasn’t until Katrina forced them out in 2005 that they lived on land for the first time, suddenly amongst stores and streets and cars.

OBSERVING THE TIDES
Glo Francis grew up in Pilottown, like her parents before her. She spent 63 years there. She and her husband, Milton, now live on a quiet road off Belle Chasse Highway, near a few of their neighbors from Pilottown. Most of her life it was easy to observe the high and low tides of the river, literally underfoot, when she walked the Pilottown boardwalk. Now she’s separated from the river by the levee, a pasture and the busy road.

Her distance from the Mississippi is less than half a mile, but she’s a lifestyle away from Pilottown. “I used to love to see the river,” says Glo. “All those passenger ships passing by.”

In Pilottown, Glo worked in the kitchen at 1 Bar Pilots Way, the three-story West Indies-style station for the Associated Branch Pilots –– the same building where she and her husband sought safety during Hurricane Katrina.

“I stayed for Betsy, and I stayed for Camille,” Glo told me when I first met her in 2001. “I always said Pilottown was the safest place to be. The water washes in, and it washes right back out.”

During Katrina, though, it washed in with a tide that threatened them on the third floor of the pilots’ station. They felt the

building lift off its pilings –– and, luckily, drop back on. Glo hasn’t been back since then.

Instead, the association decided to rebuild a station upriver in Venice. “Even before the storm,” Lorino says, “we noticed that Pilottown was becoming obsolete. We often had power going down, unreliable phone and Internet connections. We had to bring our employees and groceries down by boat. The world was just passing us by.
“But when you have a home somewhere for a hundred years, you just live with it.
Once Katrina came through, I knew we would have to do something different.”
So they leased land in Venice and built a new station. “That’s going to be our home now,” he says.

The pilots’ associations have had a complicated and often rocky relationship over the years, and their conflicting decisions on where to rebuild has further complicated matters. While the Associated Branch Pilots moved upriver to Venice, the Crescent River Port Pilots returned to Pilottown.

“It makes sense to be here,” said Crescent River Port Pilot President Captain A.J. Gibbs in October 2007, when we toured Pilottown together. “This is where the river changes pilotage.”

He said he’d restored waste service, electricity, BellSouth telephone lines and satellite television. “We have everything we had before the hurricane,” he said, “except about three buildings.”

Gibbs, who is also a commissioner of the Port of New Orleans, collected on insurance claims to rebuild in Pilottown. We walked through the association’s buildings and met crew in the watchtower and galley. There was a curious chatter of Spanish amongst the employees because a number of the men are from British Honduras. They seemed at home in the lush, humid marsh, and they each hollered “adios” as we walked toward the Crescent River Port Pilots’ station that’s being rebuilt and is nearing completion.

Gibbs pointed out what will be where and what used to be here and said, “I did a hundred ships walking through this door,” and then we were standing on the second floor at the back of the building, the windows and doorways still exposed.

There was little sound. Not a deckhand hollering to another. Not a sound of thick steel pots banging in a nearby kitchen. No foghorn or wake-up calls. Just the tall dry grass scraping together when the wind blew and a horizon of marsh as far as I could see.

Later, when I described my trip to Glo, she said of that view, “I guess all the houses must be back in the marshes,” suggesting that the structures had been pushed off their pilings.

THE FIRST TRIP
This reminded me of my first trip to Pilottown when I’d wandered through the Delesderniers’ old general store, which closed in 1958. The building had been abandoned, the wooden cistern out back from such a different time, and I stepped carefully through the fragile doorways, water visible through gaps in the floorboards. In 2007, there wasn’t much left of the structure to identify it as the old general store, and many of the structures I did see, such as the Associated Branch Pilots’ station, reminded me of my first impression of the store. 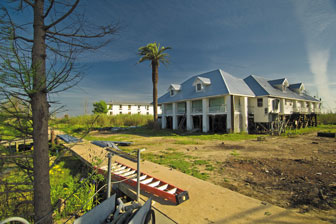 So when Glo asked, “Did you see anything, anything at all?” I remembered standing in the exposed doorway and looking at the marshes, the Associated Branch Pilots’ abandoned buildings next door, a house roof blown back and sticking up through the marsh. I remembered Glo’s husband’s old garden, which had been completely grown over. I recalled its placement only by the changed angle of the boardwalk that would have brought me to Milton’s tomato garden years ago.

Did I see anything, anything at all?

If Pilottown’s future seems uncertain, with all of its permanent residents resettled elsewhere, that’s because it is.

The first settlements at the mouth of the river formed because of the same advantages Pilottown offered –– navigation, fishing, trapping, oystering. A handful of small communities existed for short periods of time in the branches over the past few hundred years, including Burrwood, Port Eads, Pilottown and the Balize.

The Balize was Pilottown’s precursor in that it was home to pilots. It was established around the beginning of the 1700s about 5 miles below the Head of Passes. The name was French for “marker” or “stake,” and the first confirmed tower, built by Adrien de Pauger, the architect commissioned to plan New Orleans, was lighted there in 1723.

The village and its pilots gained a rough reputation for carousing and drinking. When architect Benjamin Latrobe saw the Balize nearly a hundred years after de Pauger, he reported that it was “one of the most wretched villages in the country.”

Its population was around 100 at the time – 90 men and 11 women – and he noted, “There is no where [sic] a more convenient spot from which smuggling may be carried on and connived at.” 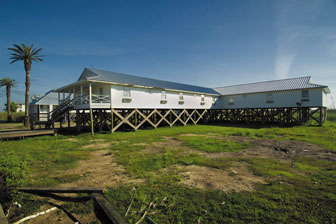 Despite the “conveniences” its remote location offered, there was a significant hazard: hurricanes. According to the National Oceanic and Atmospheric Administration, the first well-recorded hurricane at the Balize wiped out the settlement in 1740, including the French military and naval establishments. A higher island was then exposed upriver, and most of the residents resettled, calling the original settlement “the Bayou Balize” and naming their new home “the Balize.” As many as 800 people lived there at the time.

There were additional significant hurricanes in the Balize in 1778, 1831 and 1846, and 1860 was a particularly hard year, with severe hurricanes in August and September. The Balize was gradually abandoned, with postal service finally cut off in 1866.

Within a few years, a visitor noted that “now-a-days, the venerable port is almost desolate; a few damp and discouraged fishermen linger sadly among the wrecks of departed greatness. ‘Pilot Town’ … is interesting and ambitious.”
In the late 1860s, Pilottown (then Pilot Town) had a population of about 500. By 1895, postal records indicate it had recoined itself Pilottown and its permanent population was closer to a hundred. 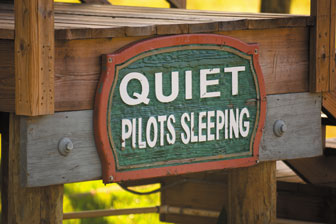 “It was already a community when the pilots moved there from the Balize,” says Lorino.

The Army Corps of Engineers traces the town’s history to the station built around 1880, with a formal founding of the community around 1900. In subsequent years, the town had an elementary school; post office; bars; and housing, including more than 30 buildings. It was bordered at the north end by oil and natural gas exploration, and the coastal marshes there were opened for exploitation during the 1930s.

It was around this time that photographer Russell Lee photographed Pilottown for the United States Farm Security Administration. The goal of its photography division was to “introduce America to Americans,” and Lee’s photos of Pilottown reveal the social and work lifestyles of the residents. He photographed pilots at work stepping to and from their boats in suits; locals drinking and gambling and playing pool in a bar; and African-American stevedores unloading lumber from a packet boat, eating meals of “cheaper cuts of meat” and living in conditions where sleeping quarters weren’t provided.

Time passed in Pilottown: A couple of naval offices were housed there during World War II, and electricity arrived in the 1950s when the population was about 200. Plaquemines Parish installed a schoolhouse, and about 20 students enrolled.

But Pilottown shared the same risk that the Balize had: hurricanes. And each time a hurricane struck and wiped out buildings, the population dwindled. Hurricanes Betsy and Camille caused extensive damage in the 1960s; by the 1970s, the schoolhouse had closed 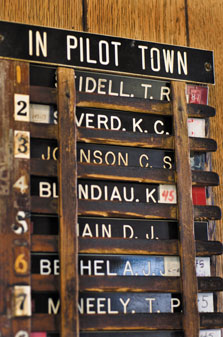 . Less than a generation later, children would no longer be raised in Pilottown. The residents who stayed grew older and reached retirement age.

Edna Smith, the last postmaster and a resident of Pilottown, retired in 1998. The postal service couldn’t find anybody to replace her, and though they leased her space and operated service out of it for a couple of hours each delivery day, it too closed within a couple of years.

Mail continued to be delivered by tugboat. “The residents of Pilottown knew that by 11 o’clock, the mail would be at the [Associated Branch Pilots’] station,” says Daisy Comeaux, a spokeswoman for the U.S. Postal Service.

The station, of course, is empty now, and there aren’t any permanent residents to receive mail. But the ZIP code remains in effect. Crew can theoretically receive mail at the ZIP, and forwarding orders keep 70081 active, but it’s unlikely that anyone will ever receive a letter from 70081 again.

When I asked Gibbs if he thought anyone would ever live in Pilottown permanently again, he said, “You never know what can happen –– with time.”

For now, though, the mail carrier only goes as far as the last business onshore in Venice. “We have a rural carrier that goes 108 miles to Tidewater,” says Comeaux. “We go as far as we can. And now, that’s the end of the road.”