The development, supported by the state through a capital outlay award of $1.7 million for renovations, is the result of some creative thinking on the part of Alexandria’s officials and staff. 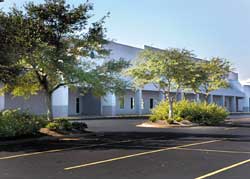 Future site of the television/film production and post-production studio and autism outpatient clinic in Alexandria.

The city is the leaser and purchaser of the building. It intends to sell the building to a management firm once businesses become solvent, thereby recouping taxpayer dollars.

“There is no such studio located in central Louisiana to serve the state’s film industry,” says Bill Hess, Alexandria’s chief economic development officer. “We are getting a lot of television and film companies coming here but after they finish shooting they have to return to either Shreveport or New Orleans to complete their editing.”

Hess said the city is also working with the England Authority at the England Airpark for the use of land as a back lot. The airbase closed in 1992.

“Louisiana is No. 3 in the country for attracting film production and we believe a studio located here is needed,” Hess says.

Christopher Stelly, executive director of Film and Television for the state Office of Entertainment Industry Development, says the state is excited about the Alexandria regional effort to attract the entertainment industry, for it marks the next step in the further growth of Louisiana’s film industry.

Sharing the building with the studio will be an outpatient clinic operated by St. Mary’s Residential Training School, a nationally recognized treatment facility for mental retardation and autism. In addition, two fledgling medical device companies will be locating manufacturing facilities at the site: Life Recovery Systems, creators of a ThermoSuit System that induces rapid patient cooling for protection of the heart and brain and Manchac Technologies, designers of a portable pharmaceutical dispenser.

“One of our primary industries is medical. Alexandria serves a nine-parish area. A medical business incubator will permit businesses to work along with the related industry,” Hess says.

Included in the development are classrooms for use by Louisiana Community and Technology College nursing students. Hess says, “We have also been in touch with Louisiana State University at Alexandria.”

“We are very much interested in this concept,” says Thomas Armstrong, Louisiana State University at Alexandria vice chancellor for academic and student affairs. “We are interested in connecting students to the community.”

“We [Alexandria] have a very entrepreneurial-minded mayor [Jacques Roy] who is vested in infrastructure and seeks to connect with higher education. All of this is central to long range success,” Armstrong says.

Mint Condition
The glitter of gold is drawing visitors back to the New Orleans Mint where an exhibit on gold and silver coinage highlights building usage from 1838 through its 1909 closure.

One of only two former U.S. mints to house art and history exhibits (the second being in Charlotte, N.C.), the New Orleans Mint reflects the popular 19th Century Greek revival style.

Following its 1909 closure as an operating mint, the U.S. Treasury used the building to house an assay office. From ’32 to ’43, the former mint served as a federal prison and later as a storage facility for the U.S. Coast Guard. The state of Louisiana was deeded ownership of the building in ’66 on the condition that it renovated and found a new use for the structure.

Over 200,000 artifacts, including the exhibit on the history of the building itself, were evacuated from the facility following Hurricane Katrina, says Greg Lambousy, Louisiana State Museum director of collections.

The state reopened the mint in September 2007, with its current exhibit, which features a unique 1861-O half-dollar once owned by the DuPont family and on loan from owner Robert LeNeve of Boynton Beach, Fla.

“For the reopening, Rick Demers, a coin collector from the New Orleans area, loaned the museum his complete type collection of New Orleans Mint silver coinage,” Lambousy says. Featured in the exhibit is a small coin press purchased from the Mint and later owned by the Mardi Gras doubloon maker Alvin Sharp. There is also a section devoted to counterfeit coins featuring an 1857 half-dollar counterfeiting device, Lambousy says.

Since the reopening of the mint in September, the state is seeking to add to its collection with coins and associated artifacts from the 1865 SS Republic wreck site.
The ship, sunk off the coast of Georgia, was carrying $400,000 in gold and silver coins to New Orleans, including coins minted in the Crescent City at the start of the Civil War.

Returning in the later part of the year will be the mint’s extensive “Jazz History Collection,” containing the world’s largest number of instruments owned and played by important figures of jazz, including Louis Armstrong’s cornet.

OPELOUSAS MEMORIALIZES PRIEST P.O.W.
The heroic acts of a parish priest who lost his life aboard a torpedoed Japanese prisoner of war transport ship are now forever remembered through depictions carved into a 17-foot marble statue fronting St. Landry Catholic Church in Opelousas.

The statue shows Father Joseph Verbis Lafleur of Ville Platte with outstretched arms supporting a fellow prisoner of war as the soldier crawls upwards and toward freedom as the ship sinks.

Of the three bas-relief carvings fixed to the statue’s base, one is of Father Lafleur assisting an injured soldier from Clark Field in the Philippines. Japanese planes are seen overhead as bombs fell that day following Pearl Harbor.

For this and other acts of bravery demonstrated, he was posthumously awarded the nation’s second highest commendation, the Distinguished Service Cross.

The statue, carved in Italy by sculptor Franco Alessandrini, is made of white Carrara marble and stands prominently at the front entrance to the church. 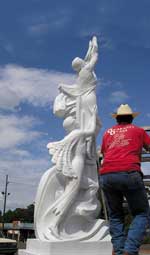 A worker installs the statue of Father Joseph Verbis Lafleur.

Father Lafleur began his military service in July 1941, as a first lieutenant in the U.S. Army Air Corps. He was with the 19th Bombardment Group at Clark Field in the Philippines when the Japanese attacked on Dec. 8, 1941.

Witness accounts describe how Father Lafleur repeatedly crossed onto the field to help the wounded and dying without regard for his personal safety, Carol Lafleur says.

Several months later, he was taken prisoner in Corregidor. He was one of 11,000 prisoners of war taken by the Japanese and one of 2,000 at Davoa.

Attending the 2007 dedication ceremony in Opelousas, was prisoner of war survivor Bill Lowe of Riverside, Calif. “There was never any fanfare or theatrics about him,” Lowe recalls. “His dignity stood out.”

Lowe says Lafleur ministered to the sick and dying daily. He was respected and trusted by the men and able to command their cooperation.

“He was so sincere,” Lowe says. “And while it’s true, I never had a conversation with Father Lafleur, other than to say, ‘Good morning, Padre.’ It was his example that led me to convert to Catholicism. He had something special and I wanted some of that.”

As American forces prepared to retake the Philippines in 1944, prisoners of war were packed into the holds of ships for transport to Japan. The ships flew no flags noting prisoners of war were aboard. One such ship, carrying 750 of the men from Davoa, including Father Lafleur, was torpedoed on Sept. 7, 1944.

Carol Lafleur says, “I understand that they asked him to go first but he said, ‘No,’ then he gave the men a short blessing and began helping as many as he could out.”
“Our purpose in the beginning was to do something so our children and grandchildren would know him,” Carol Lafleur says. “Now there is something not only for our own family, but for everyone to see and understand who he was and all he gave.”