News Notes from Around the State 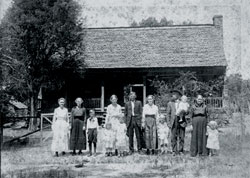 The Colvin family circa 1885 in Dubach.

Dogtrot Capital Receives a New Find
The community of Dubach is adding to its collection of 19th century dogtrot cabins by restoring an 1883 house, which will be used as a welcome and information center.

Built for Thomas Yancy Colvin on Pea Ridge Road in Lincoln Parish, the house has remained vacant since the 1960s.

“Once the house is restored on U.S. 167, which is soon to be a thoroughfare through Central Louisiana, it will be a landmark for Dubach that can provide tourists an opportunity to stop and enjoy our state and its traditional culture, as well as the wares of area artisans,” says Nancy Jensen, project director. 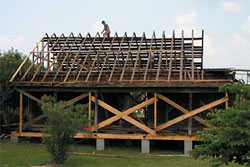 The Colvin’s dogtrot during restoration.

Designed as a way to increase a home’s cross-circulation, the dogtrot features two living areas joined by a center breezeway that allows cooling breezes to flow into the rooms and through windows situated on the exterior walls.

Just as the house was divided, so were the activities of the family. One side was dedicated to private use, housing the bedrooms, while the other side was used for cooking and dining.

According to Dr. Susan Roach, folklorist for the Louisiana Regional Folklife Program at Louisiana Tech University, Colvin had the house built for his bride-to-be, Mary Idera Lizette Ball.

It took three months for Colvin’s uncle, John Mayfield, to frame and complete the house.

“The story says that all the lumber for the house was dressed by hand, and the house was originally roofed in pine shingles,” Roach says. “The house was built with milled heart pine, measures 34-by-40 feet, and has four rooms, two iron stone fireplaces and a large open hall down the center.

“A separate ell, with a dining room and kitchen accessed by the central hallway, was built onto the back of the house around 1900,” she adds.
That addition has since collapsed and is not restorable. Both chimneys, however, will be reconstructed.

Through recent years, parts of the house were vandalized – mantels, doors, door facings, some of the siding lumber, baseboards and a front column are all gone. Of the porch railing, only its supports remain on the columns.

Roach said despite the thefts, enough of the original detail remains so that, with the help of period photographs, the exterior can be authentically restored.

The house was moved June 14.
Work now begins on raising money for the restoration, which should take about one year, Roach said.
– Jacqueline Cochran

City boy to Country Gentleman
Epicurean collector and shop owner Patrick Dunne may be a New Orleans resident, but for the past nine months, he has lived a dual life as that of a country gentleman.

“The winds of the world have blown me here for sure, and we are staying,” he says of his new Breaux Bridge store. “It’s the healthiest and happiest business decision I have made in a long time.”

Lucullus in Breaux Bridge is the third of his stores, and the first to operate away from the bustle of the Big Easy.

His Magazine Street store was out of commission, smashed by a fallen oak tree, and there was no telling how long it would be before the Chartres Street store would see the return of its pre-Katrina business.
While the city worked to gather her children home, Dunne turned to his own family – his staff – and announced he would open a store in Breaux Bridge.

Dunne’s friends advised him, “Go to Atlanta, go to Houston, go to Baton Rouge,” but when longtime friend and fellow antiques dealer Robert Smith told him of the vacancy of a large shop located in a two-story historic downtown Breaux Bridge building, Dunne decided, sight unseen, to venture west.

Located four miles past the Atchafayala Basin and six miles east of Lafayette, Breaux Bridge is Louisiana’s crawfish capital. Its downtown has several fine restaurants and antique markets, as well as a thriving arts community.

“You know people in New Orleans believe the world ends at Lake Pontchartrain,” Dunne says with a laugh. Just the idea of driving two hours was unthinkable for most New Orleanians, he adds.

Dunne’s staff warned him that while they would help him with the opening of “his country store,” the manning of it was another matter.
“They are fighting now to see whose turn it is to come,” he smiles.
Dunne says the people, the atmosphere, the charm of the country have all worked to win his heart.

“I feel to some extent I have gotten in touch with some important values,” he says. “We have known the kindness and hospitality of so many. – J.C.

Louisiana School for Math, Science and the Arts Expands

Artist rendering of the Louisiana School for Math, Science and the Arts in Natchitoches after expansion.

Louisiana’s premier school for math, science and the arts is expanding through a $12 million construction and renovation project that will provide students with a new cafeteria, theater, art gallery and recital hall.
The school’s 1938 Natchitoches High School Trade Building will be gutted and the interior will be reconfigured to house a large painting and drawing studio, a printmaking studio, a graphic arts lab and a ceramics and sculpture studio – with indoor and outdoor kilns.

The second floor of the trade school building will house music – complete with soundproofed studios, a practice room, a rehearsal room, instrument storage and a keyboard lab.

The second floor of this new building will also provide all students with a services area where there will be study and meeting rooms, mailboxes and a technology center.

The plans also include a courtyard and walkways.
Opened in 1983, the school was recently named by Newsweek magazine as one of 21 “public elite” high schools in the nation, based on exceptional ACT and SAT scores.

The Louisiana School for Math, Science and the Arts in Natchitoches is a state supported residential school for high ability students. Classes are taught from a college-style curriculum and of its faculty, 60 percent hold a Ph.D.

Students are accepted through a competitive admissions program with admissions from more than 75 percent of the state’s parishes. Of those students accepted, about 25 percent come from lower income homes.
According to Widhalm, groundbreaking should occur this coming spring. The entire project, renovating the old trade school – the demolition of an existing warehouse behind the school and the building of the new facility – should take 18 to 24 months.

The current amount approved by the state for the project is $12.3 million.

Widhalm says that just getting to this point in the design phase has taken longer than expected.

To fit a new building on the campus, it was necessary to negotiate a trade with neighboring Northwestern State University, he says. LSMSA agreed to build a new physical plant for the university, in exchange for the property where the old plant stands and an adjoining soccer field.

“As a result of the delay, I believe we have not only a larger and better defined campus, but we have a better idea of what we need in a new building,” Widhalm says.

Design for the LSMSA project was awarded to the New Orleans firm of Eean McNaughton Architects. Widhalm says that, among other projects, the firm has designed the Benjamin Franklin High School campus and earned national recognition for their work restoring the Old State Capital in Baton Rouge. – J.C