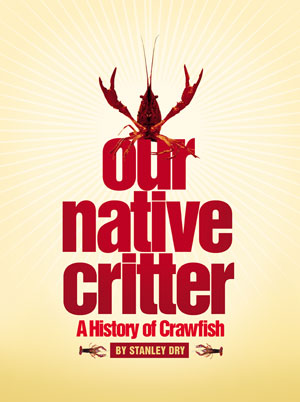 My principal interest in crawfish has always involved cooking and eating. I’m not alone on that score – crawfish have been considered a delicacy in Europe for centuries. However, the story in Louisiana is a bit more complicated.

American Indians consumed crawfish, and likely introduced them to early settlers. In their booklet, Crawfish – Louisiana’s Crustacean Delight, Jay V. and Judith M. Huner mention that a plantation owner north of New Orleans raised crawfish in a pond during the late 1700s. The first recorded commercial harvest of crawfish was in 1880, when 23,400 pounds were harvested from the Atchafalaya Basin. There are also records of crawfish being sold at the New Orleans French Market in the late 1800s.

Since crawfish have a long and storied history in French cuisine, it was only natural that French settlers in Louisiana should have warmly embraced the native supply. Consequently, crawfish dishes occupied places of prominence in the Creole cuisine of New Orleans. Our earliest written recipes for crawfish appear in two New Orleans cookbooks, Mme. Begue and Her Recipes and The Picayune’s Creole Cook Book, both published in 1900. 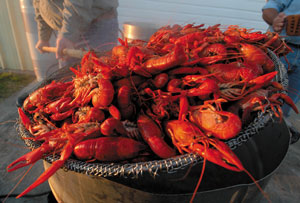 The Begue book included recipes for two versions of bisque, one of them Mme. Begue’s, the other attributed to one Monsieur Victor, a chef who had operated a popular restaurant on Bourbon Street since 1830. Interestingly, Victor’s recipe was spelled “crayfish”, while other recipes in both books used the “crawfish” spelling. Victor’s recipe also differs from the others in that peeled crawfish tails are served in the bisque along with stuffed crawfish heads. 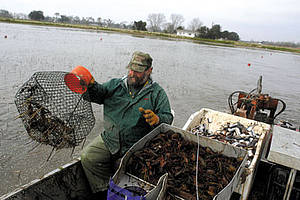 CAJUN SNUB
Today, crawfish are associated in the popular imagination with Cajun food, and indeed, southwest Louisiana is where many of the state’s crawfish ponds are located. But the Cajuns have not always been so fond of crawfish. Acadian refugees who settled in Louisiana certainly had no tradition of eating crawfish, and there’s little indication that they were quick to embrace the crustacean.

According to Stir the Pot: The History of Cajun Cuisine, by Marcelle Bienvenu, Carl A. Brasseaux and Ryan A. Brasseaux, crawfish didn’t play a significant role in the Cajun diet until the mid-20th century. Before the Civil War, crawfish bisque was served in the homes of the Acadian gentry who had sampled it in New Orleans. However, most Cajuns appear to have eaten crawfish only during floods. Even in the early 20th century, it appears that the only time Cajuns consumed crawfish was during Lent, when they boiled the crustaceans.

Indeed, in rural southern Louisiana, crawfish developed a stigma as “poverty food.” During the Depression, Red Cross workers and various government agencies tried to encourage the consumption of crawfish as a plentiful and cheap source of protein but their efforts met with little success. In the years after the Depression, crawfish sometimes sold for four cents a pound.

In the 1950s, state-funded crawfish farming began on a small and experimental scale. In 1959, the Louisiana legislature named Breaux Bridge the Crawfish Capital of the World and allocated additional funds for research into crawfish farming. The town celebrated its centennial anniversary that year with a festival the following year that officially became the Crawfish Festival. 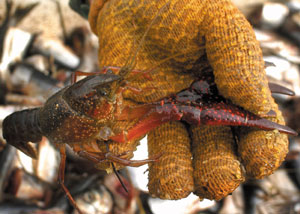 During the 1960s, crawfish farming expanded greatly and entrepreneurs opened processing plants to peel and package crawfish tails for restaurant and home consumption. The growth of crawfish farming in southern Louisiana both increased the supply of the crustacean and extended the season. Ongoing research at the Louisiana State University Agricultural Center (LSU AgCenter) and the University of Louisiana at Lafayette’s (ULL) Crawfish Research Center contributed greatly to scientific knowledge of the crustacean. By the mid-1960s, there were about 10,000 acres devoted to crawfish farming in Louisiana.

During this same period, the Crawfish Festival helped raise the image of crawfish and popularized its consumption. With a steady supply of peeled crawfish tails that could be frozen for off-season, restaurant chefs and home cooks were encouraged to expand their use of crawfish. By the mid-1970s, the land devoted to crawfish farming in Louisiana had increased to about 44,000 acres.

HEALTHY CHOICE
Today, crawfish are consumed widely in every type of preparation imaginable and the crawfish has become a symbol of Louisiana that is recognized around the world. Somewhat surprisingly for something that’s so tasty, the crawfish is also a healthy choice. Crawfish are a low-fat, low-calorie food, high in protein and a good source of some minerals and vitamins. Depending on the preparation, however, the final dish can contain a lot of sodium or fat. Boiled crawfish are sometimes quite salty, while etouffees and stews often contain a great deal of fat from the butter or margarine used in their preparation.

Most of the crawfish harvested in Louisiana are farm raised. In 2005, the latest year for which there are complete figures, there were 1,275 crawfish producers who cultivated 116,734 acres of crawfish ponds, yielding almost 74 million pounds of crawfish. The gross farm value of the farmed crawfish harvest was more than $40 million. Most of the wild crawfish harvest comes from the Atchafalaya Basin. In that same year, 1,101 fisher folk brought in more than 8 million pounds of wild crawfish valued at about $4.5 million. Because of the devastation from hurricanes Katrina and Rita, the pond harvest in 2006 was somewhat lower. Some ponds in southwest Louisiana are still out of production due to salt water intrusion caused by Rita.

Crawfish are aquatic crustaceans with gills that allow them to live outside water for extended periods, so long as their gills remain moist. In order to survive in wetlands, rice fields and meadows – where the water level rises and falls during the year – crawfish burrow into the ground in search of moisture and to escape predators. 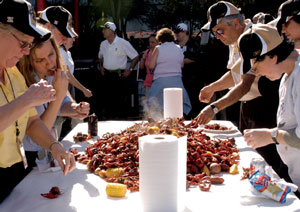 Burrows consist of a vertical tunnel dug from one to three feet deep, terminating in a small chamber. As crawfish excavate their burrows, they bring balls of mud to the surface and build chimneys to protect and seal their homes. The crawfish then settle into their burrows to wait out the dry season. Crawfish mate in open water before entering a burrow, but females lay their eggs in burrows, and many are hatched there.

Crawfish farming follows the natural life cycle of the crawfish, but the farmer has more control over the timing of the cycle’s stages. Once a pond is stocked with crawfish, the crawfish continue to reproduce and restocking is usually not necessary as long as the pond remains in production.

During periods when the pond is not flooded, crawfish retreat to their burrows. After the rice is harvested, the stubble produces a second crop, which serves as forage for the crawfish. In Crawfish – Louisiana’s Crustacean Delight, the Huners explain how the process works: “Basically, as the vegetation decomposes (‘rots’), it provides nutrients for the growth of all sorts of small animals that the crawfish catch and eat. They also eat rice and weed seeds and, if conditions are especially bad, they eat the decomposing vegetation and digest the living coat of microbes surrounding the inert dead plant material.”

During periods of drought, as happened in the 1999-2000 and 2000-2001 seasons, crawfish can suffer from a lack of moisture in their burrows, severely affecting the size of the harvest. According to Dr. Jay V. Huner, former director of the ULL Crawfish Research Center and currently a consultant to the crawfish industry, autumn rainfall is also crucial. “Crawfish cannot grow until they come out of their burrows. Rainfall generates signals to the females that it’s safe to release her young crawfish.”

When the weather turns cold, crawfish retreat to the bottoms of ponds, dig shallow burrows and don’t emerge until the water warms. This helps explain why crawfish can be available in November and December but a cold January and February can cause supplies to become very scarce. Crawfish also stop growing when the water is cold so a hard winter can result in a late spring harvest.

If weather conditions and water levels haven’t been conducive to the crawfish’s life cycle, the wild catch from the Atchafalaya Basin will be adversely affected. Since the wild catch comes later than the pond harvest, the length of the crawfish season is shortened when nature doesn’t cooperate.

The fact that farmers don’t have to feed crawfish with pelleted feed is very different from, say, catfish farming, where fish are fed with manufactured feed. Crawfish farmers do use pelleted feed as bait in their traps during harvest season. However, the amount used is a tiny fraction of that required for raising catfish.

Some have expressed concern about the effect on crawfish of pesticide use in rice fields. In recent years, there have been instances of pesticide drift from rice fields that killed crawfish in adjacent ponds. Researchers at the LSU AgCenter are currently studying these issues.

Fortunately for the consumer, crawfish do not tolerate much in the way of pesticides. According to the Crawfish Production Manual, published by the LSU AgCenter, “Crawfish are very sensitive to most chemicals and, as a result of carelessness, production can be eliminated in a short period.” However, some herbicides and insecticides are approved for use in crawfish ponds, so there continues to be the issue of how much, if any, residual effect they might have on crawfish.

One of the unexpected consequences of crawfish farming is that it has benefited wading birds, such as egrets, herons and ibis, which are attracted to ponds by the presence of tasty crawfish. Although crawfish farmers don’t often welcome these hungry visitors, they can take satisfaction from knowing that their work has contributed to an increase in the populations of these beautiful birds.