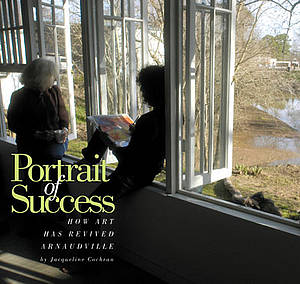 Studio, gallery and guest house, Turtle Cove is located on the banks of Bayou Fuslier. Owners Toni Daigre and Sue Billet  find the back porch is their favorite place to create art and share a cup of coffee with other artists.

From the junction of two bayous where Attakapas Indians met to trade, a pied piper tunes his instrument and plays for the muses of art and music. From near and far the call is heard and born from the remains of a shrinking agrarian culture is a rural art movement.

“I’m totally enchanted,” says Phil Kaelin of Nashville. “Thirty years I’ve been a painter and sculptor. What is happening here is a cultural renaissance and I’ve been sucked into the whole vortex of it.”

Kevin Murphy, a social worker and musician, left his home in Rhode Island last year after visiting the St. Landry parish town  of Arnaudville and today is building a home and recording studio one mile from the town center. His girlfriend, Daryl Harwood, a Rhode Island potter, will join him in a year. 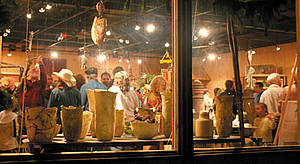 Local grocer Melanie Olivier handed the keys of a vacant NAPA auto parts store over to Lafayette sculptor Williams Lewis for use as a temporary studio and home. Following a year of negotiations Lewis bought the town’s long deserted cinder block water plant for transformation into a three-story home and in the bargain acquired the town’s first two-cell jail, which he has since transformed into an overnight guest house – “Bed, Bread and Water.” 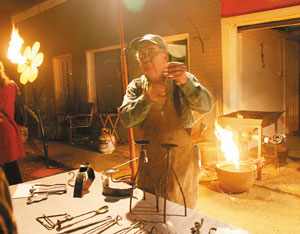 Blacksmith artist Carol Hebert displays his craft and its process.

Painters Toni Daigre and Sue Billet of Lafayette did the same with a neighboring building that was literally being used as a crack haven. It now serves as a studio, gallery and on occasion, guest house with a screen porch overlooking its backyard bayou.

Dr. John Daigre, a retired pediatrician and folk art expert, moved his Lafayette antiques business to a former feed store at the west edge of town. On any given weekend you can hear him playing piano while waiting for the next customer to stop in.

Last, but certainly not least is the coeur de coeurs, the Town Market, which displays the works of more than 40 emerging artists. Within one year it has become more of a community center than retail endeavor.

It is here, among the raku pottery, ting and tang of vibrantly colored glass mobiles, numerous paintings, furniture art and cedar sculptures, that town residents and artists meet for lunch every second Tuesday and brainstorm together for ways to promote their emerging art community. “It’s a family affair – a Town Market family affair,” says artist, market owner and driving force George Marks. 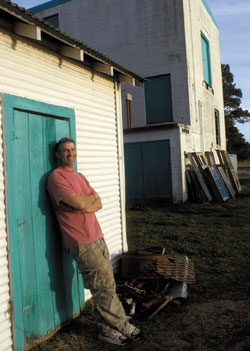 Sculptor William Lewis stands outside the old fire station that will be his studio and the old city water plant, background, that he’s converting into his home.

With her infant son on her hip, Lisa Cross wanders through the market on a Saturday afternoon with her husband, G. Pearson Cross, an assistant professor of political science at the University of Louisiana at Lafayette. “When we moved here we located close to the university,” Cross says. “When [I] see places like this I wish we had investigated our options.”

That same day Tom Carwell and his wife Myra Hirschberg of Ontario, Canada, entered the store. They were sent by a friend in Breaux Bridge who insisted they visit the market if for nothing else than to see the wall of lights, a creation of Marks’ nephew Jeremy Rivette, who has taken up brush and paint. “I really like the taste of what’s in the gallery,” Carwell says with eyes wide and wandering.

The art movement has provided Arnaudville with another product it can market, says Chamber of Commerce President Mike Lofton. “It is giving people a reason to visit Arnaudville, instead of just accidentally driving through.”

At 137-years-old, Arnaudville has seen the ebb and flow of many, including early settlers heading west. Off the beaten path and with little in the way of historic buildings, this town of 502 households has struggled in recent years to tap into the cultural tourism industry that now bolsters Louisiana’s economy. Here at last is a product that’s drawing visitors while at the same time providing locals with both social and cultural opportunities – not to mention lots of fun. 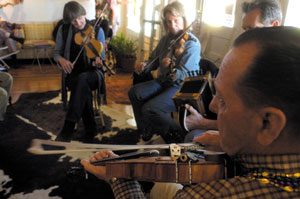 Every third Friday, people from near and far bring their favorite dish for contribution to a potluck dinner and spend the evening meeting featured artists. Lynda Frese describes recent photography composites enclosed in turn-of-the-century oval frames. Kelly Guidry introduces his latest creation carved from blocks of cedar. A band strikes up a tune in the adjoining “NUNU’s Nightlite” room and dancing commences. At every turn, hands are extended in welcome as native meets visitor and friendships are culled from acquaintances.

Art classes for children are offered as a “Brown Bag” event on the first Saturday of every month and area French speakers gather for La Table Française on the last. This past December, a second “Fire and Water” festival, initiated as a means to help displaced artists show their work, drew record crowds.

It is late Saturday afternoon and seated together on a bandstand built by Murphy and other musicians are Debbie Lagrange, Murphy and Marks. Floor-to-ceiling windows open the room to beams of light bouncing off still bayou waters running along the back of the market.

“Four years ago I purchased one of George’s paintings at a silent auction in Baton Rouge. I didn’t know who George was at that time,” Lagrange recalls. “It stayed on my wall for two years before we met.”

Marks returned to his native Arnaudville in 2003, and shortly afterwards she met Lagrange. “It was after he and Jeremy started renovating the old Western Auto into an art market. That’s when I told him, ‘If we had more artists like you we could transform the town. People like you with vision and energy.’ And that’s when he says, ‘How many do you want?’”