The old Riverfront District of Alexandria is born again with its charming cityscape almost good as new. Of course Art Deco, Nouveau and Neoclassical storefronts are sprinkled across most Louisiana towns, but you must see with your own eyes to grasp the size of the Riverfront District and extent of its restoration projects — all completed in record time by civic-minded entrepreneurs inspired by history-loving banker and investments counsellor Mike Jenkins. Luxurious accommodations, fine dining and multiple forms of art, music and theater, with a levee-top walking trail for lagniappe await. Street events are frequent, ranging from a bandstand or two to a giant event like the Alexandria Winter Fete (Dec. 1 through 3).

Jenkins himself has restored enough vintage structures to pass for a one-man Main Street Program, including his staggeringly expensive revival of Hotel Bentley; his purchase of the dazzling Diamond Grill, which was on the brink of closing after the death of its owner; and his careful renovation of the 1820 Loyd Hall Plantation, 20 miles south of Alexandria near Cheneyville (a full facelift plus an heating and cooling system once considered impossible there).

Jenkins differs with observers who see his projects as pure philanthropy, asserting that he’s a businessman first and always (though he does admit to “a leaning toward investments involving properties of historic importance”). That “leaning” has proved to be of incalculable value to the community.

The district stretches from the Jackson Street Bridge to Winn Street, and it’s best toured on foot. From the welcome center at 707 Second Street (318-442-9546, alexandriapinevillela.com) cross Jackson and begin crossing and recrossing Second and Third streets to zigzag your way downriver.

The first stop, at the very foot of the bridge, is the venerable, circa-1908 Hotel Bentley, cherished by all of Louisiana and more than once believed to have been lost (318-442-2226, historicbentley.com). Lumber mogul Joe Bentley’s instruction to architect George Mann was brief: “Make it the finest in the South.” He did, and now a century later, everything is as fine as ever. Chandeliers glitter below the coffered ceiling of the Grand Ballroom, the Bentley Room’s 2,400-square-foot kitchen is ready for action, and despite major delays, like the flooding and replacement of the newly rebuilt elevator system, Jenkins has stuck to his plan of reopening the hotel in phases. The Mirror Room (many mirrors removed to reveal more marble) opened in May 2015, three levels of guest rooms opened this May, and the Bentley Room will begin serving its “casual Southern comfort foods” this November or December.

The Diamond Grill at 924 Third St. (318-448-8989, thediamondgrill.com) occupies the 1931 Schnack’s Jewelry store, where Jenkins’ friend Robert Tudor introduced five-star dining to the district in 2006, and his magical sauces and intriguing recipes are now preserved and expanded at the hands of Jenkins’ team of chefs. Lighting, woodwork and glasswork remain from the days of Carl Schnack, pilasters that once demarked sales areas retain their unique ornamentation, and rest assured that every edible  item on your table, right down to the salad dressings and ice creams, is created in-house.

Opposite the Grill and beyond the city hall/convention hall complex, the Alexandria Museum of Art now occupies the handsome 1898 Rapides Bank Building at 933 Second St. (318-443-3458, themuseum.org), which offers exciting exhibits from around the globe but is particularly proud of its permanent collections of Louisiana fine and folk arts. A few steps away, the Riverview Amphitheater (with its schedule of almost constant events) is set into the levee above the 1000 block of Second Street. 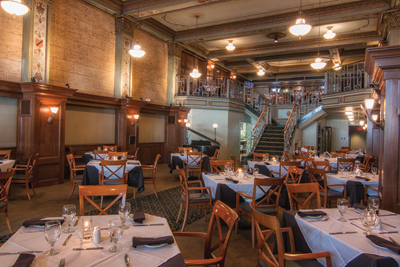 Cross Second to tiny Alexander Fulton Park (honoring the earliest settler here) for a view of the city’s first skyscraper, the 1915, six-story Commercial Building at 201 Johnston. Jenkins calls it the prettiest building in town; he bought it in 2000 and his offices have been there ever since.

Cross Third to the block-long former Kress dime store (1939), now the Rapides Foundation Building, with its two entrances: 1102 Third for the Hearn Stage and its cozy blackbox Kress Theater, and 1101 Fourth for performances by the Alexandria Symphony, Red River Chorale and City Park Players, or to visit the Arts Council of Central Louisiana.

The 2004 state-of-the-art Collins-Saunders Performing Arts Center at 1202 Third (318-767-2600, coughlin-saunderspac.org) operated by the Arts Council, attracts top national entertainment, serves as home stage of the Langiappe Theatre Co. and Rapides Symphony (Dec. 4) and presents such local specials as the Cenla Christmas Spectacular (Dec. 10).  For a complete calendar of arts and entertainment in Alexandria-Pineville, visit louisiana-arts.org and click “Calendar/News.”

“No one lives in the district now, zero,” he says, stating his theory that residents would attract new services, which would attract more residents.
There will soon be condominiums in the old “Tower Section” of the Bentley, as well as in his newly acquired 1927 Masonic Building.

“We’ve reached a stage where the district could be taken to the next level,” he says, “and my long-term hope is to see someone with more energy and more wherewithal come along and take it there.” 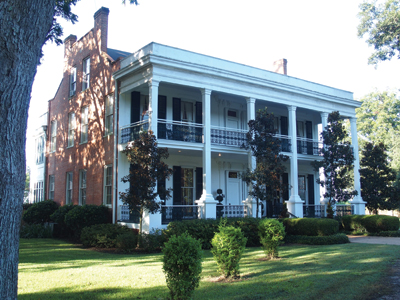 Anything for the Cause
An historic marker surrounded by marble stairs at Hotel Bentley’s entrance reminds us that during the Louisiana Maneuvers which preceded WWII, soon-to-be generals Ike Eisenhower, Omar Bradley and George Patton were willing to give up the pleasure of tent camping to “bivouac” at the Bentley. They were even willing to sacrifice the delights of K-rations to endure the fare of the Bentley Room! Collections of Maneuvers-related weapons, uniforms and memorabilia are on display at the Fort Polk Museum near Leesville (on base at 7881 Mississippi Ave., Bldg. 927), the Louisiana Maneuvers Museum at Fort Beauregard in Alexandria (623 G St.), and in the Bentley’s marble-columned lobby.

Plantation Pleasures
Beulah Davis of Loyd Hall, star of four decades of articles, interviews and travelogues, is famous for her stories of the plantation — stories of the home’s history, its families, its interesting visitors — some flesh and blood, others a bit more, shall we say, ethereal. Meet her in the kitchen early for more conversation time.

If you plan to visit Alexandria’s 1796 Kent House at 3601 Bayou Rapides Road, remember that this year’s Sugar Day is Nov. 12, a rare chance to see the 1840s iron-kettle granulation process in action. Remember too that you can enjoy lunch hot off the open-hearth fire on any Wednesday, October through April.

All for One
The Riverfront District provides the setting for an interesting nighttime tour. Begin with a good Irish whiskey at Finnegan’s Wake Irish Pub (813 Third St.), then experience that “true lounge feel” and taste of infused spirits from the craft side of cocktails in the Bentley’s Mirror Room. Next comes the Embers Bar (313 DeSoto) where they’ll recommend a rare beer or mix you a very special Bloody Mary, and then off to the Diamond Grill’s Mezzanine Bar to enjoy the view from the top while sipping one of their voted-best martinis or something from their enviable wine list. Finish the night at Studio 1016 (1016 Third), a dance club with a state-of-the-art sound and light system.