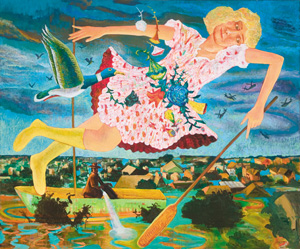 A young woman in a flowered dress floats dreamily across the canvas in a dark blue sky. Her blond head rests on one shoulder. Ducks fly by while in the distance mosquitoes seem to swarm in a swirl of white clouds. Her face is serene and her eyes are open, glancing slightly downward but not really looking at any one thing in particular. They seem turned inward and resigned to a life drowning before her eyes. The dream is a nightmare. The mosquitoes are not mosquitoes at all but rescue helicopters flying in a distant circle over the flooded Lakeview neighborhood of New Orleans. Rooftops rise above putrid floodwaters coated with swirling pools of burning chemicals that seem eerily beautiful. A shadowy man in a boat searches the water with a flashlight.

But what is he searching for? Perhaps the obvious – the living, the dead. Or maybe he’s looking for reasons and understanding why almost 2,000 people died when the city’s floodwalls collapsed in the wake of Hurricane Katrina. Perhaps he’s throwing light upon a disaster and the reprehensibly poor response by government agencies that left thousands of desperate people stranded and dying. Perhaps he’s showing us how fragile our lives, our connections with the past and our place in nature, really are.

The man in the boat is the acclaimed New Orleans painter, sculptor and teacher Robert Warrens and the young woman, his wife and former New Orleans gallery owner, Sylvia Schmidt. The painting is “Viewing Lakeview,” one of many images Warrens conjured on canvas as he reflected upon the destruction and misery in New Orleans and the Mississippi Gulf Coast, the flooding and tidal surge that destroyed homes, lives and even hope for many. Warrens and Schmidt were not simply observers of these horrific events, for both had houses in Lakeview that remained flooded for weeks. Like so many New Orleanians they’ve struggled to reconcile their lives with this tragedy. 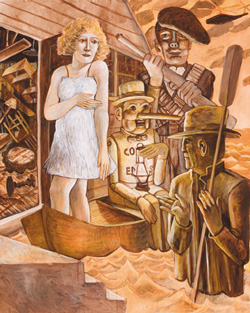 Warrens and Schmidt evacuated to Baton Rouge as the storm approached. A week later, they returned to New Orleans to check their houses and her gallery on Julia Street in the New Orleans Arts District. (Due to great losses, Sylvia closed the gallery after the storm.) Bypassing guards, they made their way to Julia Street but couldn’t get into Lakeview. They thought they might enter by boat but the water was too high and electricity poles were down. It was too risky. Flooded Lakeview triggered an idea in Warrens’ mind to paint an image of Sylvia and him boating into their flooded neighborhood in search of Sylvia’s house. Two months later, he completed “Viewing Lakeview after the Levees Broke.” “It was a fantasy rescue,” Warrens says. Actually, all of the images in this series are fantasy. New ideas surfaced from the water.

This series, featured in a special showing last August at the Ogden Museum of Southern Art, is not just about Katrina. It relates to global warming and rising sea levels and other social issues. “It became a mystical and magical experience,” Warrens says, reflecting upon each painting. “Putting a figure in water is a timely thing to do because of global warming. It raises all kinds of issues and not just negative ones. There’s baptism and this religious and spiritual connotation, too.” In essence, his figures of people, boats, helicopters, frogs and dogs are supporting actors in the real drama – rising water. 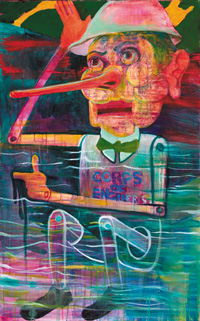 The Katrina paintings are classical Warrens. For four decades he has used his art to explore the nature of art, social ills and the polluting of our environment. While many artists bludgeon viewers with these topics, Warrens entices with a complex and satirical pictorial vocabulary that is disarming, engaging, entertaining and often enigmatic. His intensely bright and colorful cartoon-like imagery is a playful means to draw viewers through the looking glass to darker messages. He has often used frogs, rabbits and other animals in his compositions as allegorical elements to help explain human and social conditions. Most of his paintings are, in a way, autobiographical – even the Katrina paintings. He and Schmidt, including several of her childhood photographs, appear in almost every painting. They are fantasy autobiographies that are more statements of anger, loss and anxiety than actual experienced events. Nothing is what it seems to be at first glance.

Many artists have responded to this disaster through their art. Yet, Warrens responded to these same horrors in a way that is typically Warrens. He doesn’t disturb us with vivid images of destroyed houses or bodies floating face down in the putrid sludge – no tears, no sentimentality, no sinking hearts and gasps – but he does entertain our eyes while our minds begin to interpret what is really going on behind the playful characters. What could be more entertaining and, at the same time, more serious than the paintings “Levee Man,” “Fixing the Levees” and “Escorting the Corps of Engineers to Inhabit 6054 General Diaz in Lakeview.” We can laugh at an almost submerged “Corps of Engineers” Pinocchio and the five-handed government bureaucrat, sticking their fingers in a leaking wall. But there is certainly nothing funny about government deception before, during and after the greatest natural and engineering disaster in the nation’s history. We see these paintings as if through the twin masks of Greek comedy and tragedy, one deceptively over the other. 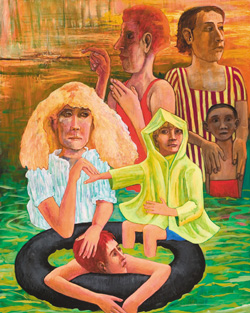 “Wading Through Lakeview After the Levees Broke”

Even in his landscapes, “In the Gulf of Mexico” I and II, “Dancing Waters,” “White Wave,” “The Surge” and “Storm Surge,” drama unfolds. Here again, he doesn’t show us the obliterated heart-wrenching remains of the Mississippi Gulf Coast but in his violent seas we see the power and the force and we know what’s about to happen. What could be more terrifying than anticipation of the known? “These paintings allowed me to get more violent,” Warrens says. “They give me a vehicle to show the horrors of it.” In “Hurricane,” he brings together all these bad memories of destroyed houses, broken trees, turbulent seas and suffering; stranded people at the Superdome, pleading for food, water and help while officials in D.C. were initially oblivious to the problem. “The hurricane gave me all these reasons to create these apocalyptic and wonderful skies,” he says. “Sunsets are always so beautiful here because of pollution and not just the coming of a storm.”

Some paintings in the Katrina series leave little room for interpretation. “Levee Board Luncheon” shows Levee Board officials at a steak and wine dinner while the floodwalls leak. In “King Corps of the Levees,” Sylvia Schmidt stands in the doorway of her flooded Lakeview home. Piled behind her inside the house are the ruined remains of her possessions. A boat is wedged between her stoop and flooded automobile. Inside the boat stands Warrens himself holding two oars. Sitting before him in one of Sylvia’s antique chairs is “King Corps,” appearing once again as Pinocchio, this time looking somewhat like the tin man in The Wizard of Oz. He is holding Sylvia’s prized antique clock in his lap, as though he was salvaging it from the flood. In his mouth is a garden hose that’s connected to a faucet on the side of Schmidt’s house. He is sucking polluted floodwater from the house and spurting it like a fountain from the top of his funnel-like hat. The hose represents what? Warrens explains, sort of: “I was attracted to the absurdity and foolishness of the Corps. Much of what they did didn’t make sense, so why should this? It’s just a way to make the Corps look foolish. It’s hard for me not to inject humor even in a tragic event.”

The Katrina paintings are Warrens’ most powerful work yet. “It was the most historic event I’ve witnessed firsthand,” Warrens says, gathering his thoughts about why he decided to relive the storm in each painting. “Half the city or more was devastated, so many people’s homes were destroyed, deaths mounted daily. It was so catastrophic that I had to address it. Sylvia lost everything. As a creative person, I thought I must document it in my own way. These paintings span the whole emotional spectrum – tragedy of the people, global warming and the foolishness of public officials. I deal with what occurred without it being overly literal and I present it in a way that can be accessible and people can deal with. I didn’t want to overwhelm viewers with anger and realism or create an impression of no hope.”

Warrens has been on this journey of “intense reality” as an artist and teacher for four decades. In 1990, the New Orleans Museum of Art gave a 20-year retrospective of his work in “Paintspitter: Paintings and Constructions by Robert Warrens.” His work can be found in many important private and public collections and his paintings have been featured in shows at the Whitney Museum of Art in New York, the Chicago Art Institute, the Corcoran Gallery of Art in Washington and others.

The Wisconsin-born artist has been an important guiding figure in Louisiana art since moving to the state from West Virginia in 1967 to teach art at Louisiana State University in Baton Rouge – he retired in ‘98 as a professor emeritus. “In the ‘60s, I thought culture was imploding,” Warrens said in a 2004 radio interview. “Moving from West Virginia to Louisiana was a real cultural shock. Louisiana was just mind-blowing in itself. You had the assassinations of JFK, Bobby Kennedy, Martin Luther King, the Vietnam War, sexual revolution, the drug culture, student demonstrations, race riots – all this stuff occurring at once and I thought I needed to reevaluate what I’m doing. I’ve got to find an art that expresses the time period. So I tried to be as outrageous as the time itself.”

In New Orleans, he later became part of a group of artists a New Orleans art critic dubbed “Visionary Imagists.” Prominent British art critic Edward Lucie-Smith, writing in his book about American art in the 1980s, describes Warrens’ “fantasy” paintings as the “quintessence of this particular aspect of Louisiana art … [that] introduces the spectator to a world where objects are in a constant state of transformation and where the artist’s impulse toward the fantastic is powered by a manic energy that is at variance with the traditional sleepy elegance of the Deep South.”

Fantasy seems to fit Warrens and his paintings. As an artist, he considers himself an entertainer, an actor upon a stage where he can create illusions and fantasies before viewers’ eyes. “I can perform different roles, assume different costumes,” he says. “That’s why I feel comfortable shifting from one subject to another. I can’t imagine staying with any one thing [for] any length of time.” With Katrina and all the world’s problems around us, we can only hope his performances, his illusions on canvas continue. “I’m happy with what I’ve accomplished but it’s not over yet.”