The world of soups includes everything from the precious and esoteric to the homey and comforting, from thin and intense consommés to thick and hearty concoctions that blur the boundary between soups and stews. I love them all, but my preference runs to the latter, particularly this time of year, when substantial, full-flavored food is what we all crave. With some good crusty bread, any of this month’s recipes can make a meal.

Those of us who love to make soup have certain techniques and ingredients that we prefer, some mainstream, some quirky. As do many others, I use some type of stock in most soups. I like the flavor, body and savoriness that stock brings to a soup. There was a time when I always made my own stock, but these days I mostly rely on a good commercial product, although if there’s a ham bone or turkey carcass in the house, I’m not going to let it go to waste.

Soup recipes really lend themselves to substitution and experimentation. For example, the turnip greens and orzo soup could be made with another type of greens, such as mustard; vegetable or ham stock could replace the chicken stock, and another type of small pasta could take the place of orzo. The golden potato soup can be made with white potatoes, if that is what you have, although it will no longer be golden. Another type of winter squash can be substituted in the butternut squash soup. Split pea soup benefits from the addition of ham, but it’s not essential. Likewise, you don’t have to use smoked sausage in the lentil soup.

Texture is another element that is mostly a matter of taste. Two of the recipes call for pureeing the soup; the others do not, but that is not written in stone. Any of these soups can be turned into a puree, if desired. Likewise, any of them can be served in a chunkier style. In that case, the vegetables should be cut smaller than specified in the recipes.

Wash and roughly chop turnip greens. Combine greens, garlic and chicken stock in a large pot. Bring to a boil, reduce heat and simmer, covered, until greens are tender, about 30 minutes. Puree with an immersion blender or, if using a standard blender, puree and return to the pot. Season to taste with salt, black pepper and cayenne. 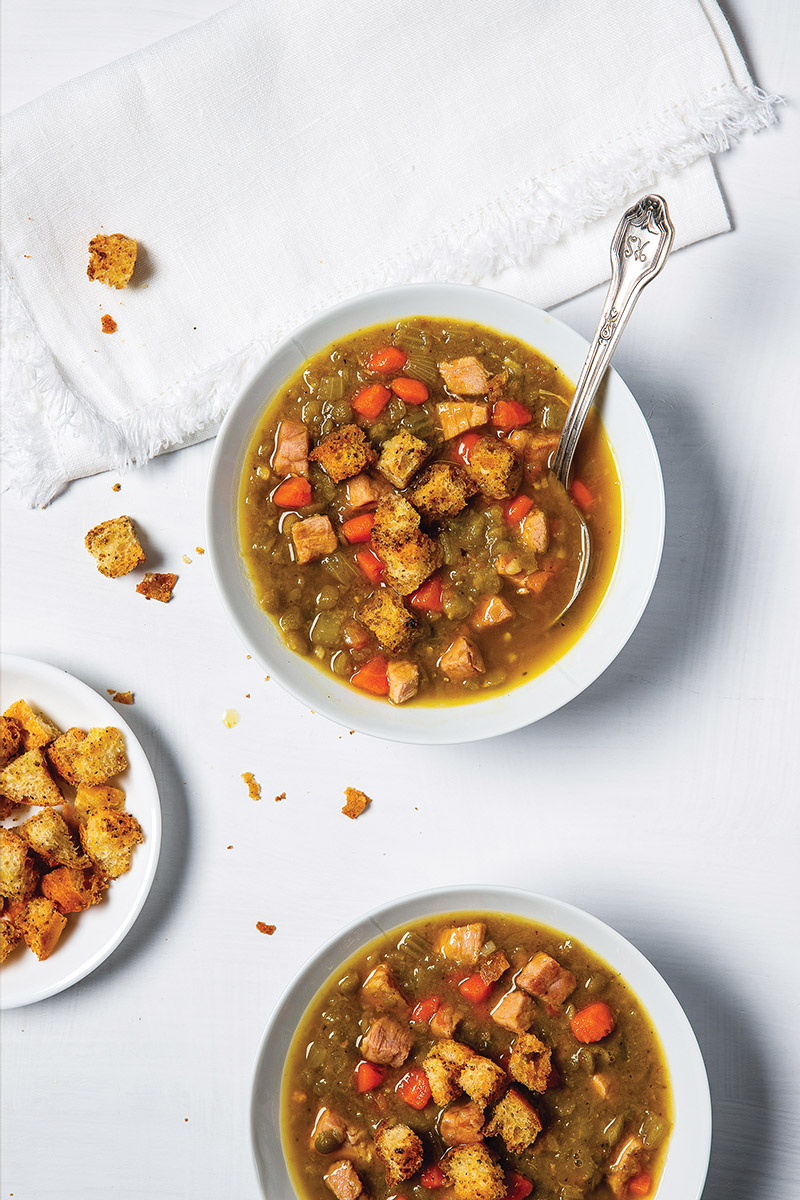 Peel and slice potatoes. Combine potatoes, butter and chicken stock in a saucepan. Bring to a boil, reduce heat and simmer, covered, until tender, about 30 minutes.

Cook bacon until crisp, drain on absorbent paper and chop. When potatoes are tender, partially mash them with a large metal spoon, leaving some chunks of potato. Season to taste with salt and pepper.

Bring to a boil, then reduce heat, cover and simmer, stirring occasionally, until peas are tender, about 1 hour. Season to taste with salt and black pepper. Add cubed ham. Makes 6 to 8 servings.

In a medium saucepan, combine butternut squash, butter and chicken stock. Bring to a boil, reduce heat and simmer, covered, until squash is tender, about 15 minutes. Puree with an immersion blender or, if using a standard blender, puree and return to the pot. Season to taste with salt, white pepper and nutmeg.

Cook sausage in a large, heavy pot until browned on both sides. Pour off rendered fat. Add onion and garlic and simmer until onion is softened, about 5 minutes.

Add lentils, chicken stock and water, bring to a boil, reduce heat and simmer until lentils are tender, about 25-30 minutes. Stir in spinach and season to taste with salt and pepper.

Serve with olive oil and vinegar for each diner to add as desired. Makes about 6 servings.