The View from Above

Louisianians have heard the alarming reports. Rising sea-levels, saltwater intrusion, land subsidence, canal dredging, hurricanes, invasive animal species and man-made levees are destroying Louisiana’s coastal wetlands at a rate of up to 35 square miles a year, an average of a football field an hour, and by 2050 a stretch of Louisiana coastline the size of Rhode Island will be underwater.

“Louisiana’s wetlands are disappearing at an incredible rate and I want to document this landscape before it’s gone,” says Ben Depp, a New Orleans-based, freelance, documentary photographer who has spent the last five years photographing Louisiana’s vanishing coastline and threatened coastal communities.

Depp’s dramatic photographs of Louisiana’s coastal wetlands, one of the most productive estuaries and ecosystems in the world, bring clarity and immediacy to statistics, maps and scientific reports. One can actually see submerged marshlands, dead stands of cypress, disappearing barrier islands, man-made canals cutting through wetlands, and the growing vulnerability of small coastal fishing villages like Isle de Jean Charles in Terrebonne Parish.

To capture those startling images, Depp mounts a motor-powered paraglider, with an 80-pound gasoline, 19-horsepower airplane engine strapped to his back. So far, he has flown above the state’s coastal marshes from St. Bernard Parish to Cameron Parish at elevations from 10 to 5,000 feet to photograph the ongoing environmental tragedy in South Louisiana. His images are stunningly beautiful, composed by an artist, and at the same time frightening.

“Because South Louisiana is so flat,” he says, “to really get any perspective you have to be up in the air to understand what’s around you. The photographs help you understand the inherent value of this landscape and what’s being lost. People know the coast marshes are changing but few have been out there. It’s a very inaccessible landscape. My photos are to help people see the value of the landscape and what’s happening. It’s a magical experience — and a little terrifying.”

Depp first thought of using drones to capture the images, but drones were too expensive and limiting. A motor-powered paraglider, he thought, would enable him to fly high above the marsh to get a full view and better understanding of the expansive landscape and, at the same time, give him the flexibility to explore hard to reach places.

“From up there,” says Depp, “you can see where the saltwater comes through the oil and gas canals and the marsh is breaking up and not getting new nourishments. You can see the dead oaks and cypress and remnants of old forests. You can see how the water works on the wetlands and how it moves on the beaches. In a few places, you can even see how fresh water diversion from the Mississippi River is building up new land.” 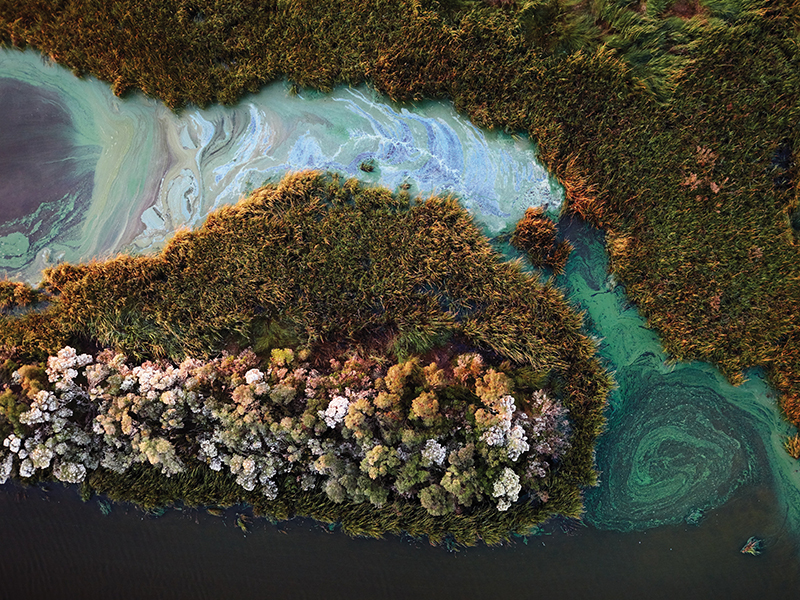 The 36-year-old Washington, D.C. native brings fresh eyes and sensitivity to Louisiana’s environmental problems.  In 2013 Depp moved to New Orleans with his wife Alexis Erkert, a lawyer with Southeast Louisiana Legal Services. Prior to New Orleans, the couple lived in Haiti where he worked as a freelance photographer covering poverty, earthquakes and the abuses in the gold mining industry on the island. He even learned to speak Haitian Creole French.

Since his early days as a newspaper photographer in North Carolina and as an independent freelancer, Depp has covered small town football, revolution in Nepal, healthcare in Cameroon, climate change, and cotton farming in Texas. Several of those projects were underwritten by grants from the National Geographic Society, the Pulitzer Center on Crisis Reporting, and the Ford Foundation. His photographs and reporting have appeared in numerous national and international publications such as The New York Times, Washington Post, Time Magazine and The Times of London. Like social upheavals in Haiti, Africa and Nepal, Depp says Louisiana’s vanishing coastline is a big story; one he feels compelled to cover.

“In my previous work as a documentary photographer,” he says, “I’d frequently fly in and out of New Orleans and I could see the wetlands from above. I saw how beautiful and serene the land is. I wanted to tell the story from above with aerial photographs.”

Taking to the air suspended from a paraglider is an adventure that often lasts several days with him camping out nights in his pickup truck. He can stay up for about three hours before refueling all the time staying within sight of dry land for emergency landings. He also wears a GPS satellite beacon device and an inflatable life vest just in case he has engine trouble over open water.

To capture the beauty of the landscape, Depp sets out at sunrise and sunset when the sun is low on the horizon and the light “rakes across the land,” creating warm, dramatic colors and depth. The results are both stunning and disturbing. To him the camera is a painter’s brush and a journalistic tool.

“I spend hours in the air, camera in hand,” Depp says, “waiting for the brief moments when the first warm rays of sunlight mix with cool predawn light and illuminate forms in the marsh grass or when the light sculpts a dead tree laying on the water at sunset. I look for spaces where the geometric patterns of human enterprise — canals, oil platforms, pipelines and roads — collide with nature’s organic forms.”

Depp’s words call to mind what the famed artist Andrew Wyeth once said about his paintings.

“I am an instrument, trying to tune in on the thing that’s already done there. I wish I could be nothing, just float over the woods and fields.”

While gliding high over these watery landscapes and what he calls “ghost forests,” the artist in Depp takes in the beauty and vastness of the landscape. But at the same time, a sorrow builds in him at seeing the natural and man-made destruction. He imagines what was and what could be.

“When I am in the Atchafalaya Basin,” Depp says, “I can see what South Louisiana should look like and what this place was. I feel a real sadness for what’s lost, a loss primarily caused by shortsighted economic gain. It’s not real economic gain when you take into account the future and exploitation of South Louisiana. With this work, I hope to memorialize this vanishing otherworldly environment.” 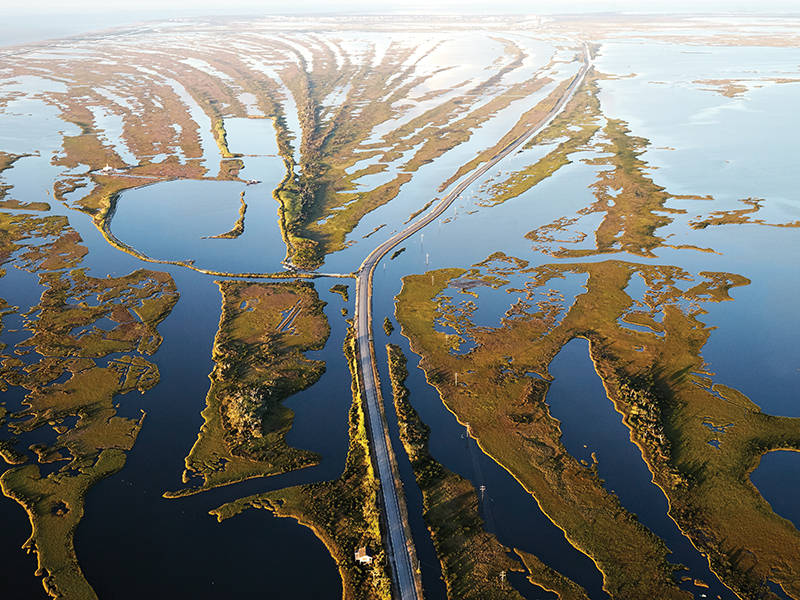 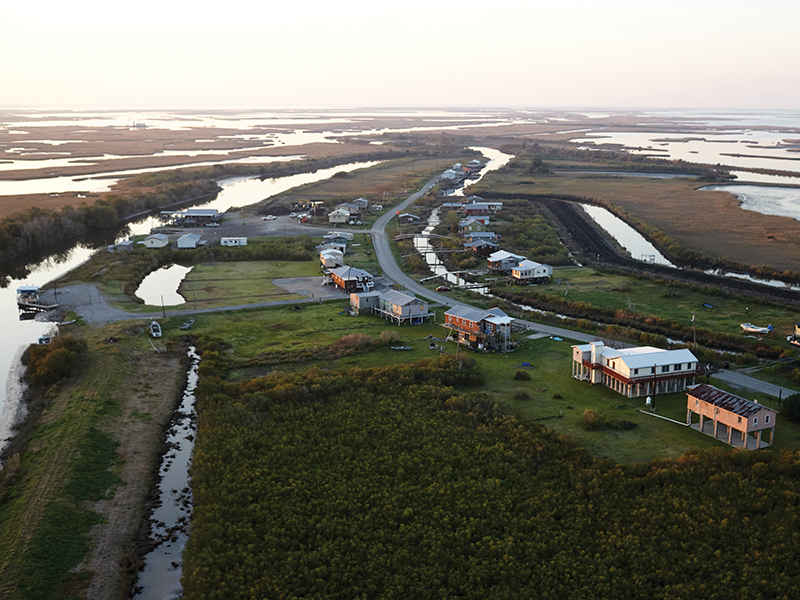 The Isle de Jean Charles used to be miles wide and surrounded by wetlands. It is now just a strip of houses surrounded by mostly open water. Terrebonne Parish, Louisiana. 2/14/2015. Photos by Ben Depp.

LSU Museum of Art. “Across the Atlantic: American Impressionism through the French Lens.” lsumoa.org

Alexandria Museum of Art. “Sordid and Sacred: The Beggars in Rembrandt’s Etchings.” Features 35 rare etchings by the master executed between 1629 and 1648. themuseum.org 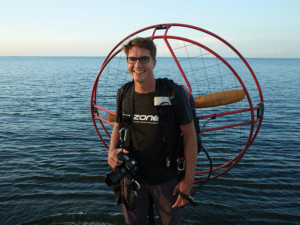