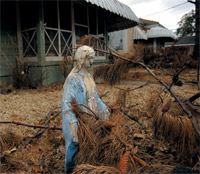 Finally, the future. For too many Louisianians, over too many days, the future stalled. Too many hours, filled with too much uncertainty, was too much to take. “This, too, shall pass.” Who first said that? Was it Jesus? Buddha? Moses? Whoever it was didn’t say how long. A week? A month? A lifetime?
Bad news, when it pours, becomes relative – on any normal day a flooded automobile is a tragedy, but not as much as a ruined home, a lost job, a missing acquaintance. Stay calm. Take a deep breath. One day soon this will be over, then we can return to search for our lives. We know that’s so, because this, too, shall pass, as soon as the future arrives – but where is it?
Autumn 2005 in Louisiana began the same way that summer ended, with an evacuation. On the first day of the new season, residents of southwest Louisiana fled Rita just as the state’s southeast had been emptied by Katrina two weeks earlier. The season’s newly fallen leaves were blown into puddles, which too often became streams.
Fall is not supposed to be like summer, and summer is not supposed to be like the apocalypse. There is hope, though. It is the future.
“This, too, shall pass” traces to the Hebrews. Eastern spiritualists continued the theme. To hurricane evacuees, the phrase is the bible.
Now the future is here. Louisiana is returning to what resembles normal. The future is a powerful force, and though it won’t let us totally forget the past, mercifully it can take us further from it.
As autumn works its magic, maybe now we can pause to carve the pumpkin, shell the pecans, bake the sweet potatoes, grill the boudin, cheer with the crowd and totally enjoy the moment. There’s time. If only, now, the future doesn’t move too fast.