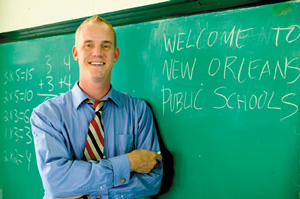 Like so many other residents of New Orleans, Troy Peloquin lost everything in the fury of Hurricane Katrina. The only possessions he salvaged from his flooded home were his college diploma, passport, his father’s dog tags, a set of cufflinks his mother had given him as a birthday present and his collection of more than 300 rubber ducks. His vivid memory of the ducks floating to the door when he opened it days later is the only dose of genuine levity he has enjoyed in two years.

Months after the storm, fate dealt him another, even more severe blow. During his first year as a ninth grade science teacher at John McDonogh High School, after several years as a public instructor at Audubon Aquarium of the Americas, he suffered a savage attack in his classroom from a student he describes simply as “too old to be a freshman.” After a stint in the hospital, he began a long process of restorative dental work that continues today.

Then last October, Peloquin, who still hasn’t moved back into his home, found his true calling – as local volunteer and donations coordinator for the Recovery School District of Louisiana, the state agency charged with administering many of New Orleans’ troubled public schools. Every day, Peloquin, a 34-year-old native of  New Orleans with roots as deep as any cypress tree – his mother is related to Huey Long – rallies a small army of corporate volunteers, community service organizations, students and church groups from across the country and around Louisiana to remodel classrooms, paint gymnasiums and build playgrounds. The challenge is a daunting one.

Yet, one day, one project and one volunteer group at a time with as many as a dozen projects going on at any given time, Peloquin transcends the lingering devastation and inspires those whose paths he crosses.

“His attitude sets him apart from anyone I’ve ever met or worked with,” says Sarah Pinsky, who has labored alongside Peloquin since last fall as director of Operation Playground, a Gulf Coast-focused Katrina recovery effort created by KaBOOM!, the 11-year-old, Washington-based nonprofit whose mission is to build community play spaces across North America. “He is so enthusiastic and resilient. Nothing gets him down. He has boundless energy and yet you know that underneath it all he faces the same stress and probably the same low moments that other people in New Orleans do. But you’d never know it. I think we’d be better off if the world had a lot more people like Troy in it.”

Adam Petermann, a 25-year-old program assistant at the Council of Chief State School Officers (CCSSO) in Washington, DC, joined Peloquin for two days at McDonogh 42 and Booker T. Washington High School in February, along with 40 other attendees from a CCSSO conference. “Troy embodies the people of New Orleans, overtly kind and jovial but with an inner sense of sadness and confusion brought about by the devastation of Katrina,” Petermann posted on the Internet after meeting Peloquin, who readily admits that the situation in New Orleans still overwhelms him. “It happens every day, until I get to where a group is working,” Peloquin says. “Then, once I get there, I feel pretty optimistic.” More importantly he adds, his work gives him a focus that helps him to survive. “If I didn’t have that, I don’t know that I’d be here,” he says with emotion.

Among those whose partnership his extraordinary perseverance has inspired are Gil Zanchi, area general manager for Marriott Hotels in New Orleans and Etienne Tardy, director of corporate sales at the New Orleans Marriott on Canal Street.

Zanchi and Tardy experienced that passion firsthand last March when they joined a group of corporate meeting planners, hosted by Marriott and HelmsBriscoe, the world’s largest site selection company, for a day of gymnasium painting at Frederick Douglass High School.

“Every person there worked harder and longer because a guy like Troy had asked them to from the bottom of his heart,” says Tardy. “Simply put, he’s a beacon of hope that people are drawn to.”

In fact, the one-day project at Douglass High had enormous impact at HelmsBriscoe.
“Working with Troy literally transformed the culture of our company,” says Executive Vice President Gary White, who wielded a paintbrush that day, too. “After the experience, a majority of our associates told us they wanted to include community service projects in all of our meetings across the country and we’re starting to do that now.”

Peloquin rarely does interviews because he wants the focus to stay on the cause and not on himself. “I’ve come to realize,” he says, “that it’s not the volunteer work that’s being done here. It’s about the volunteers getting a meaningful something out of it.”