“What we signed up for.” 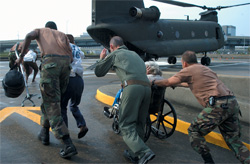 The Untold Story of the Louisiana National Guard, Katrina, Questions of Command, the Law and the Battle to Save Lives
In any ordinary early Friday evening, 19-year-old Anthony Harrison would be helping out during the weekend rush at Fanta’s Seafood in Tioga, in the piney central Louisiana hills outside Alexandria.
But instead, on the first Friday of September, dressed in his military camouflage fatigues, rifle on his shoulder, Harrison was on patrol outside the boarded-up Harrah’s Casino New Orleans at one of the key roadblocks around the perimeter of the Ernest N. Morial Convention Center, still packed with thousands of stranded victims of Hurricane Katrina who had gathered since the storm passed four days earlier.
Harrison and his buddy, Pfc. Eric Overgaard, 20, had been on the job for a week after the National Hurricane Center moved the projected path of Katrina toward Louisiana. After providing security in the Superdome, they shifted duty to securing the eerily quiet Poydras Street in the Central Business District, blocking the few vehicles or individuals that ventured down the deserted thoroughfare as the sun set over a city without power.
Nearby, on Convention Center Boulevard, calm Katrina victims were settling in for another dark and scary night made safer by the National Guard MPs. They had divided into community groups, parents taking turns sleeping and watching the children, men taking turns watching over the group and the latrine areas on the boulevard designated for men and for women, former strangers now taking care of each other. They were awaiting their turns to get on the buses that were coming in by day – also driven by National Guard members.
“We’ve got control of this area,” said a confident Overgaard, who had pulled a 72-hour shift, during which he had a three-hour nap on top of a military Humvee.
“We don’t mind being here,” said the youngster, who in his civilian life works at The Home Depot in Alexandria. Harrison finished the thought: “This is what we signed up for.”
What they signed up for was the Louisiana National Guard, the state’s military force that reports to the governor, citizen-soldiers who can be called into service by the governor or called into active duty in the U.S. Army by the president of the United States.
In their private lives, they are college students, professors, shift workers, police officers, doctors, lawyers, clerks, teachers, secretaries, bus drivers, sales personnel, dentists, nurses, business owners. They range in age from their teens to their 50s.
As soldiers, in normal times, the men and women in the National Guard work every other weekend and two weeks every year, sharpening their military skills in such esoteric areas as laying fiber-optic cable, engineering, or, in the case of Harrison and Overgaard, providing law-enforcement services as part of the Rapides Parish-based 228 MP (Military Police) Company of the Louisiana National Guard. 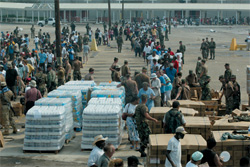 The National Guard is the nation’s oldest institution, founded in 1636 as a citizens militia to assist Colonial governors of the first English Colonies, according to Col. Pete Schneider, the Louisiana National Guard public-information officer who provided a history of the Guard. “The National Guard is the oldest branch of the military,” Schneider said.
The colonies were responsible for their own defense, so Colonial leaders followed English military tradition to organize their able-bodied male citizens into militias. The militia guarded the Colonies originally from Indian attack and foreign invaders and later fought in the American Revolutionary War.
The U.S. Constitution created the guard’s unique dual status, with control of the states’ guards resting with their governors as commanders in chief – unless they are called into active duty by the president of the United States.
The authors of the Constitution empowered Congress to provide for organizing, arming and disciplining the militia but reserved the appointment of officers and training of the militia to the individual states. That dual state-federal role of the guard remains to this day.
In 1903, national defense legislation increased the role of the National Guard, as the militia became known, as a reserve force for the U.S. Army. When the U.S. entered World War I in 1917, the National Guard made up 40 percent of the combat divisions in France.
During the Vietnam War, some 23,000 Army and Air guardsmen were called up for a year of active duty, about 8,700 sent to Vietnam. More than 75,000 Army and Air guardsmen were called to active duty in the 1991 Persian Gulf War.
The National Guard members, once called “weekend warriors,” bristle at that sobriquet today; since the attacks of Sept. 11, 2001, most guardsmen have served beyond the usual drills every other weekend and two weeks a year.
“That is a completely inappropriate term since 9/11,” said Schneider. “We’ve all done much more than that.”
Since the Sept. 11 attacks, 9,000 Louisiana National Guardsmen have been mobilized for duty in the Middle East, serving in Afghanistan, Iraq or Kuwait. 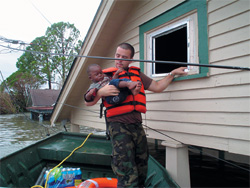 When Hurricane Katrina crossed Florida into the Gulf of Mexico, 3,200 of Louisiana’s 11,000 National Guard troops were in the Middle East.
That fateful Aug. 26, Louisiana State Police were put on storm alert that morning. Both the state police and the National Guard, part of the emergency-operations center controlled by the state Office of Emergency Preparedness, had already been monitoring the tempest when it was but a tropical storm headed for South Florida.
At the Louisiana National Guard headquarters in historic Jackson Barracks in New Orleans’ Lower 9th Ward – the Louisiana guard’s base since 1835 – the first general alarm bells went off late that Friday afternoon, the last normal Friday in the Crescent City. The 4 p.m. advisory from the National Hurricane Center moved the projected path of Katrina, until then a Category 1 hurricane predicted to go up the west coast of Florida, and predicted the storm was moving more westerly before it would turn north. Suddenly, New Orleans was in the cone of projected possible landfall.
“A lot of people were going home for the weekend,” recalled Schneider, the Louisiana National Guard’s public-information officer. “Then we saw the track of that storm start to change.”
Maj. Gen. Benny Landreneau, Louisiana National Guard commander, contacted Gov. Kathleen Blanco. Within the hour, her office began contacting media outlets, saying the governor would declare a state of emergency, which came at 5:02 p.m. “She acted very quickly,” Landreneau said. Blanco’s declaration came a day before Mississippi Gov. Haley Barbour’s. On Saturday, at Blanco’s request, President George W. Bush declared a national state of emergency also.
Those declarations trigger all kinds of actions, including preparations by the Federal Emergency Management Agency, emergency powers of the governor, an official call for help to other states and National Guard mobilization.
On Friday evening, the National Guard headquarters began calling unit commanders in the parish armories and mobilized 2,000 troops. As it was not a regular weekend drill, the commanders had to contact the soldiers.
“During the night Friday night, we kept getting indications Katrina was shifting to the west, but it was predicted it would still hit the coast,” Landreneau said.
By 10:30 p.m. Friday, the governor’s office had contacted news media outlets to warn that the National Hurricane Center’s revised forecast indicated Katrina would have a major impact on southeast Louisiana and conditions were ripe for it to grow into Category 4 or Category 5 as it moved across the gulf.
Early that Saturday morning, the Louisiana National Guard activated another 2,000 troops, and by 7 a.m., the State Office of Homeland Security had activated its Baton Rouge Emergency Operations Center, and the guard opened triplicate communications headquarters systems at Jackson Barracks in New Orleans, the Gillis Long Center at Carville, and the guard’s Camp Beauregard facility in Rapides Parish. It would prove to be a wise move.
When the officers began phoning local guard units, most of them reported guard troops had already begun arriving, even though it was an “off” weekend.
Part of the guard’s duty is to respond to any state emergency, so when troops hear of a tornado or storm, they show up before they are called.
“By the time we mobilize, we find they are already at the units standing around waiting,” Landreneau said. “I have called commanders, who have told me they were looking at their soldiers sitting around at tables. That’s just a response these citizen-soldiers have.” 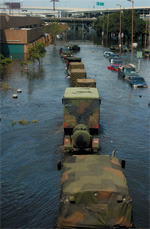 In central Louisiana, Pfc. Anthony Harrison’s flight from his training in Italy landed at Alexandria International Airport. “I did not go home. I went straight to my unit,” he said.
As the storm approached, the guard helped with the contra-flow evacuation on the interstates and brought cots, blankets, food and water to the Superdome, which opened Sunday as a shelter of last resort. Under the state’s emergency plan, guardsmen were sent to all Louisiana State Police regional offices in the projected storm area.
The National Guard hunkered down at the Superdome, Jackson Barracks, Carville, Baton Rouge and Camp Beauregard to ride out the storm. By the time it passed, 4,600 Louisiana citizen-soldiers were in the New Orleans area.
The guard’s emergency communications command center was on the third floor of a Jackson Barracks building constructed to withstand 200 mph winds. Because the 400 soldiers were there, the guard had what Gen. Landreneau called “situational awareness” of the flooding in the Lower 9th Ward and the adjacent St. Bernard Parish. After the storm, the communications system at Jackson Barracks still worked, even as communications failed among local government offices.
Brig. Gen. Hunt Downer said the Barracks campus went underwater, with a low of 4 feet to a high of 20 feet on the back side, located on the lake side of North Claiborne Avenue. “But the National Guard knows what to do,” Downer said. “We were neighbors helping neighbors.”
Guardsmen in 100 boats set out to move other guardsmen and rescue stranded citizens in the Lower 9th Ward and Arabi, just over the Orleans Parish line in St. Bernard, adjacent to the Barracks.
The guard’s communications system was shifted to Carville only for a half-hour while soldiers moved the Jackson Barracks system to the Superdome, which became command central.
Some 300 soldiers were relocated from Jackson Barracks to the Superdome by boat and helicopter.
The guard set about its two primary missions: securing the area and providing search-and-rescue operations, always supporting another agency. The guard assisted the New Orleans Police Department in law enforcement and the state’s Department of Wildlife and Fisheries, which had set out in their boat armada – when the storm dropped to mere gale force winds of 40 mph – in order to rescue people who were stranded on their rooftops, second floors, highway overpasses, car roofs, in trees, wherever they were. 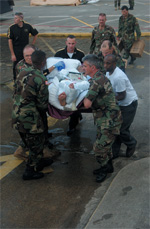