Hot spots on the Gulf for your summer of fun 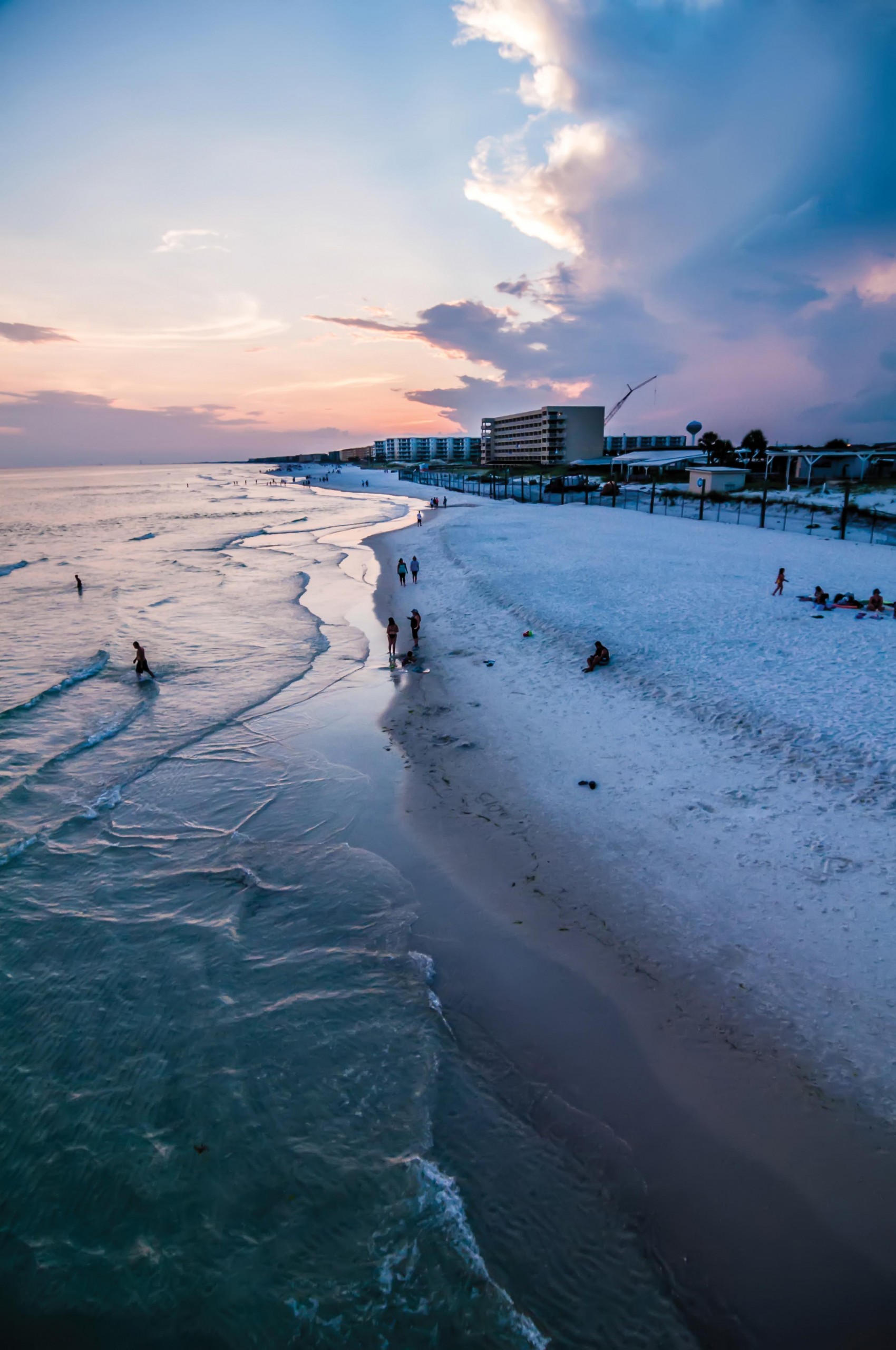 In the Deep South, March comes in like many things, not restricted to being a lion as in other regions of the country. When the sun warms our faces and winter seems to have left us for good, it’s time to think of the beach!
We’ve compiled a list of our favorites along the Gulf Coast, everything from places to rest our weary winter heads to spots to enjoy the great outdoors. We think you’ll agree.

Gulfport, Mississippi
Travel through 12 indoor and outdoor habitats and view 200-plus species at the Mississippi Aquarium, an aquatic campus on six acres in downtown Gulfport. There are both freshwater and saltwater exhibits, a 30-foot-long tunnel through water where visitors can view fish and other aquatic species at 360 degrees and special events throughout the year. msaquarium.org

Naval Air Station, Pensacola, Florida
The U.S. Navy Blue Angels, those gods of the skies, return to a full schedule of air shows this year — Pensacola on July 9, for one. But you can watch the flight demonstration squadron practice most Tuesdays and Wednesdays, March through November, at the National Naval Aviation Museum in Pensacola, which is a destination unto itself. Also, don’t miss the Blue Angels’ Naval Air Station Pensacola Homecoming Air Show Nov. 11-12.

Foley, Alabama
Visit OWA for the wide variety of amusement rides and the restaurants and shops in Downtown OWA, but don’t miss their special events, including Legends in Concert, “Menopause the Musical” and annual festivals. Coming this spring is a massive indoor and outdoor water park with lazy river, wave pool and surf simulator. visitowa.com 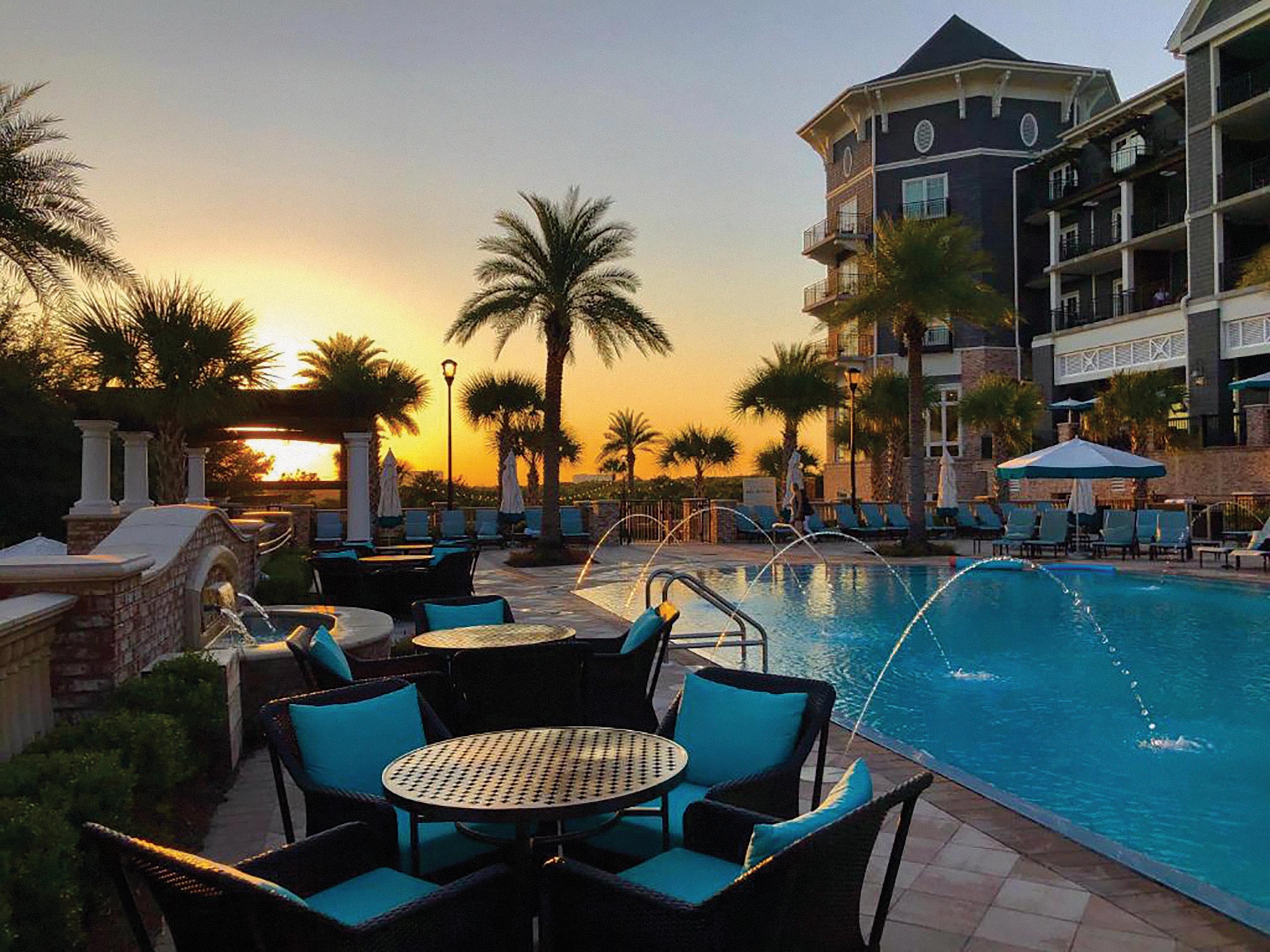 These two Destin beach properties are owned by the same company but operate separately — and that’s as it should be for they each exude unique personalities.
The Henderson Beach Resort with its massive lobby resembles an Old Florida hotel and comes complete with an elegant spa, several restaurant options and pools. The hotel has added a rooftop bar with a spectacular view of the Gulf, plus condo options.
The Henderson Park Inn caters strictly to adults with its quaint romantic getaway situated on the beach. There’s beachfront dining, beach service and happy hour, plus visitors may travel next door to the larger resort’s pools and spa.
Best of all, both properties are adjacent to Henderson Beach State Park and its miles of undisturbed beach. hendersonbeachresort.com, hendersonparkinn.com

The Lodge at Gulf State Park

The state of Alabama replaced The Lodge at Gulf State Park after Hurricane Ivan did its damage and what emerged is a sustainable 350-room lodge fronting restored sand dunes and Gulf waters on one side and Gulf State Park, with its 28 miles of hiking and biking trails, on the other. The lodge features waterfront restaurants, eco-friendly amenities and bicycles for rent to enjoy the park. lodgeatgulfstatepark.com 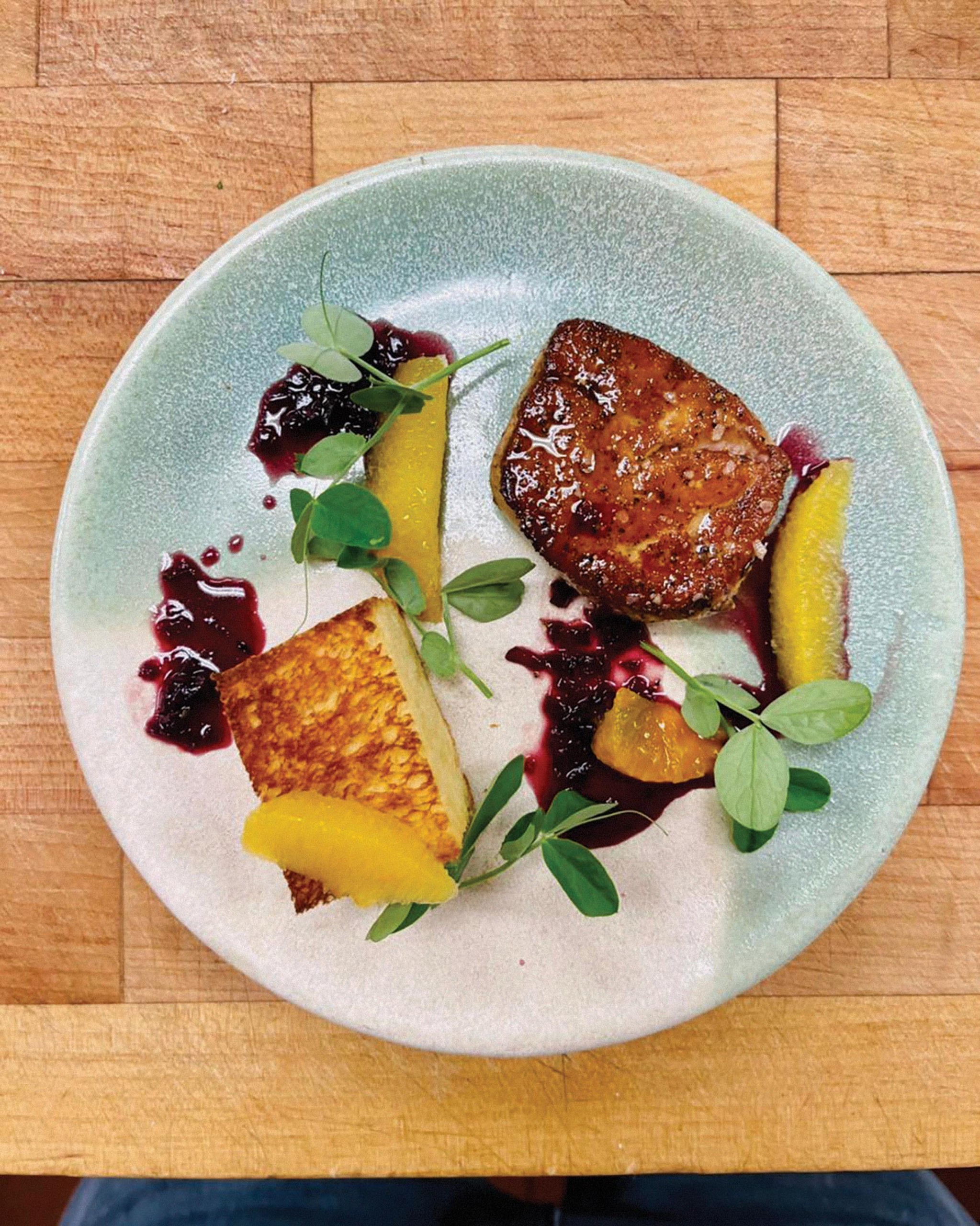 Chef Austin Sumrall was halfway to graduating with a mechanical engineering degree from Ole Miss when he decided restaurant management was where his heart lie. He took a job at John Currence’s Bouré restaurant in Oxford until graduation, then attended the Culinary Institute of America in New York. He worked with Chef Chris Hastings at the acclaimed Hot and Hot Fish Club in Birmingham but decided the Gulf Coast was where he would wear his chef’s hat after marrying his Ole Miss sweetheart, a native of Gulfport.
Sumrall opened White Pillars in Biloxi in 2017 and serves up fresh seafood and locally produced products. He was crowned King of American Seafood at 2021’s Great American Seafood Cook-Off in New Orleans. biloxiwhitepillars.com

Whether creating fused or blown glass in The Hot Shop, pottery in The Clay Studio or enjoying a scavenger hunt, the Coastal Arts Center of Orange Beach offers fun for the creative. The 10,000-square-foot fine art gallery overlooks Wolf Bay and features works from both local and regional artists in its exhibit space and gift shop. Adult art classes are routinely offered and summer art camps are available for children. orangebeachal.gov/facilities/art-center

Mobile
There are many places to enjoy art in Mobile, from the downtown galleries to the 95,000 square-foot Mobile Museum of Art and the Alabama Contemporary Art Center. The city also hosts LoDa ArtWalk every second Friday night, spotlighting artists in participating galleries and public spaces, live music and opportunities to sample Mobile’s burgeoning food scene. mobile.org/things-to-do/arts/

It’s a good hour boat ride to Ship Island off the coast of Gulfport but it feels like a world away with its glistening white sand dunes, crystal blue waters, and historic fort dating back to the 1800s. The ride there is half the fun. Visitors usually spot dolphins and exotic sea birds.
Service to Ship Island, along with the dolphin and sunset cruises, resumes March 5 through Ship Island Excursions. This year, because the “Camille Gap” created by Hurricane Camille in 1969 has been filled, along with the lack of visitors over the winter, has produced tons of shells, said Ronnie Wentzell, who runs the business with family.
“The place is loaded,” he said. “We picked up 15 pounds of shells one day.” msshipisland.com

The story goes that a hurricane shipwrecked Theodore Tollefson on this peninsula and he never left. We’re sure he fell in love with the sparkling quartz sand dunes, the migratory songbirds and deer and the sparkling waters of the Gulf on one side and St. Andrews Bay on the other. Visitors today may enjoy the 1,260-acre park and 1.5 miles of beaches but also can catch a shuttle to Shell Island in spring and summer. The park remains opens daily during daylight hours and offers two campgrounds with 176 sites. floridastateparks.org/parks-and-trails/st-andrews-state-park

The Coastal Alabama Back Bay Blueway

Folks flock to Gulf Shores and Orange Beach for the vast beaches lining the emerald Gulf waters, but there’s plenty of aqua action behind the scenes for those who love to paddle. The Coastal Alabama Back Bay Blueway gets paddlers on bayous and waterways with four “trails,” from Fort Morgan to Orange Beach, each with numerous launch sites for canoes, kayaks and paddleboards. gulfshores.com/things-to-do/outdoor-activities/back-bay-blueway

The Pascagoula River Audubon Center graces Rhodes Bayou, which drains into the Escatawpa and Pascagoula rivers, the latter the longest unimpeded river in the lower 48 states. The attraction focuses on the area’s unique ecosystems with walking trails and a children’s nature discovery garden, and an interpretive center that contains exhibit space and a gift shop. While guided boat tours of the Pascagoula River are presently on hold, the Center offers other ways of getting on the water. “We have 10 single kayaks and four tandem kayaks for rent, but new to our fleet is a pedal boat,” said Susan May Stachowski, center manager. pascagoula.audubon.org

Foley, Alabama
The annual Gulf Coast Hot Air Balloon Festival, named a 2021 Event of the Year by the Alabama Tourism Department, returns May 12-14 to OWA in Foley. This family-friendly event includes arts and crafts, entertainment and, of course, balloon flights, glows and tethered rides if weather permits.
gulfcoastballoonfestival.com, visitowa.com. 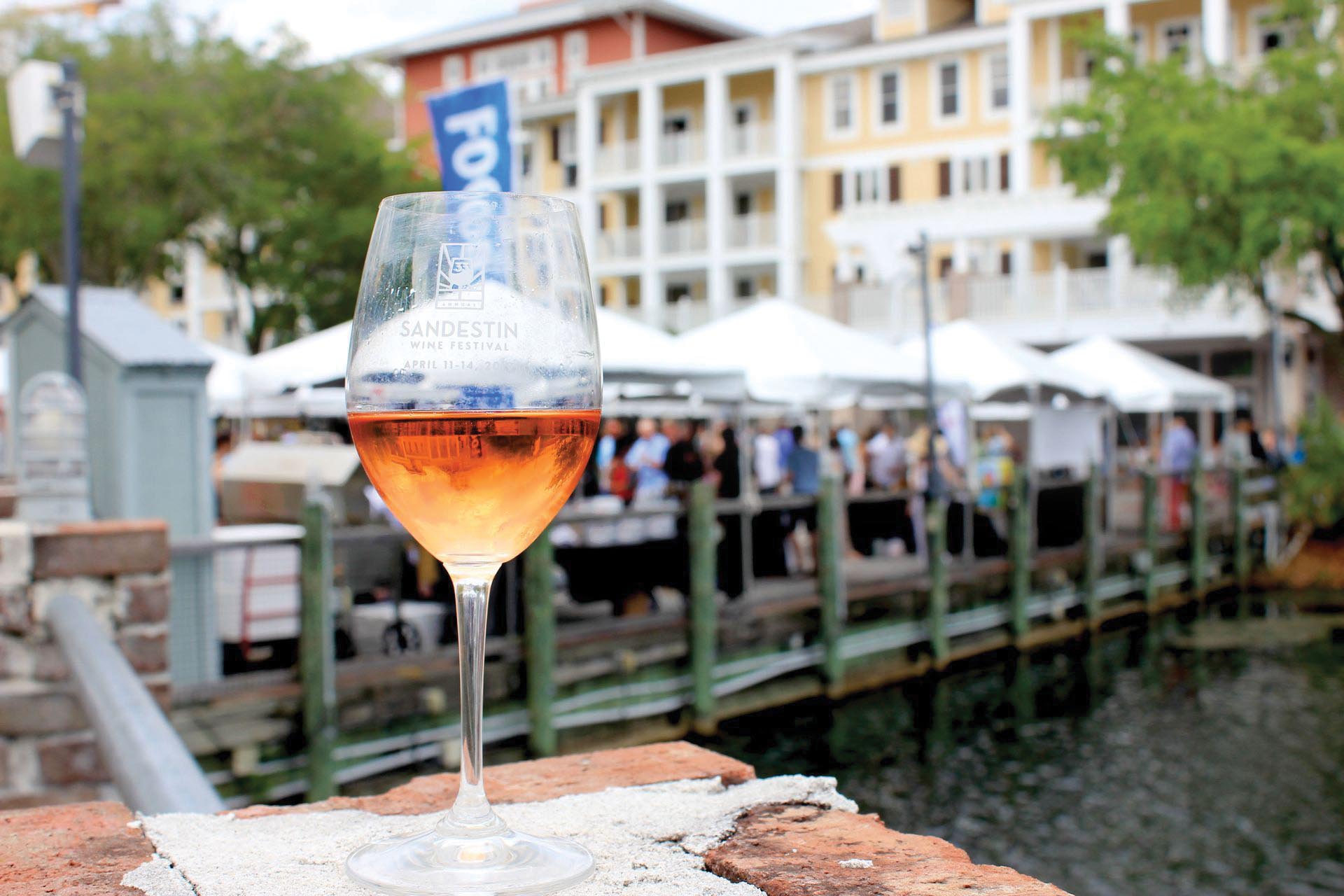 Ocean Springs, Florida
The Mississippi Songwriters Festival takes over Ocean Springs every fall with live music from both famous and up-and-coming songwriters in local venues and in rocking chair “guitar pulls” outside the Gulf Hills Hotel.
The 30A Songwriters Festival is in January and attracts dozens of artists who perform at numerous venues along the Highway 30A corridor in Northwest Florida. Past performers have included Lucinda Williams, Indigo Girls and Jackson Browne, to name a few.
mssongwritersfestival.com, 30asongwritersfestival.com 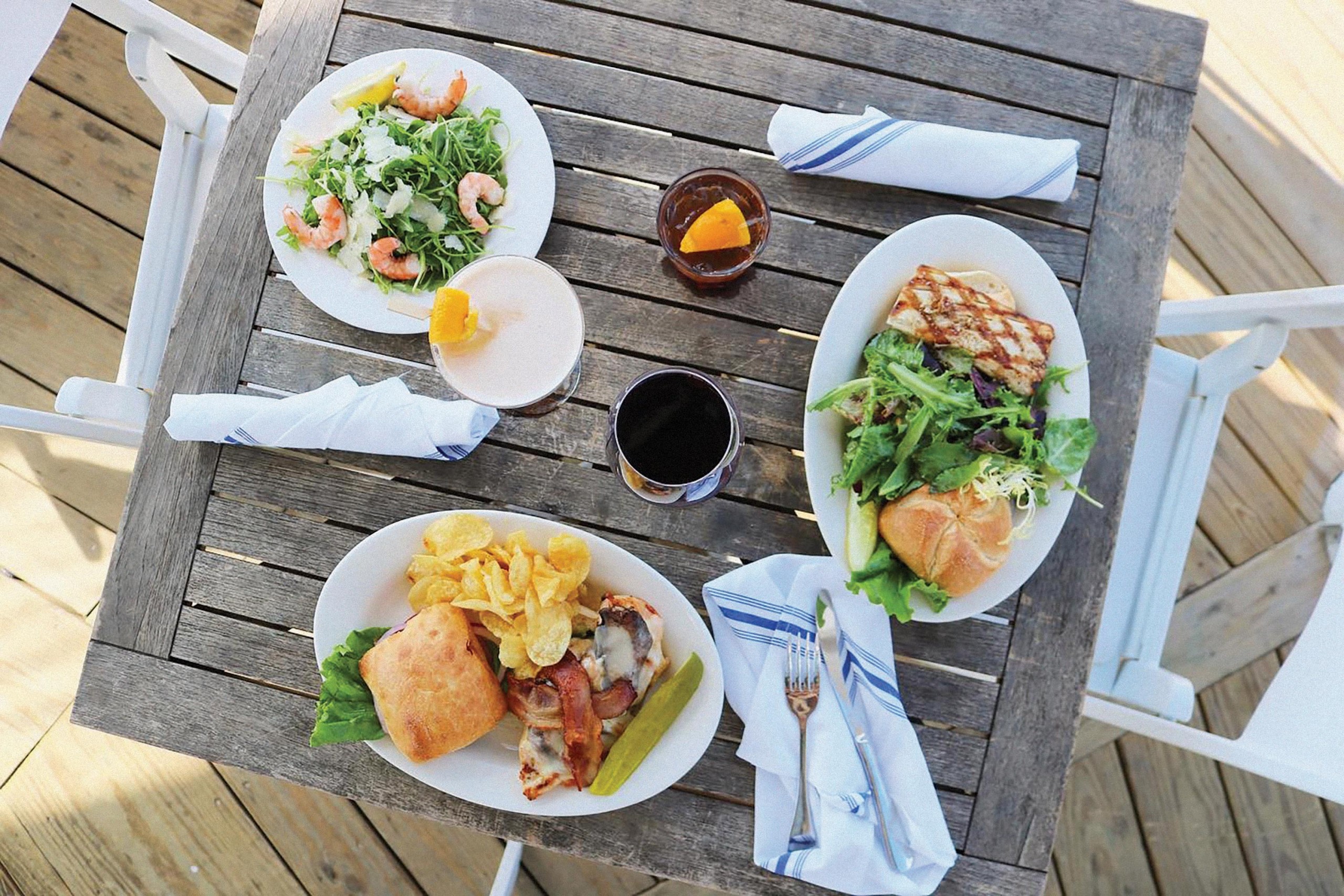 There are so many excellent restaurants along Highway 30A in the Florida Panhandle, but Bud & Alley’s remains a favorite for its fish tacos, cool drinks and the expansive rooftop bar overlooking the Gulf of Mexico. Sunsets attract the crowds, and for good reason; the world turns golden.
The establishment opened in 1986, located across from the early incarnation of Seaside. To date, Bud & Alley’s has received numerous awards, including Florida Trend Magazine’s Golden Spoon Hall of Fame Award, designating the eatery as one of the Top 20 Restaurants in Florida. And, of course, it nabbed the Best Sunset View by Visit South Walton. budandalleys.com