In St. Bernard Parish, about 30 minutes outside of New Orleans, sits Docville Farm. A charming turn-of-the-century, white farmhouse greets visitors as they approach the pecan grove on the opposite side of the road. Horses, geese, chickens and a few friendly barn cats occupy the pristine red barns and out buildings. Despite the farm’s proximity to the Crescent City, it feels a world away.

Docville is a center for culture and learning and is a project of the Meraux Foundation, a nonprofit dedicated to benefiting the St. Bernard community. The property stretches from the Mississippi River to Lake Borgne and looks straight out of a movie. In fact, the Dave Thompson Even Barn served as the set for the Texas honky tonk in HBO’s True Detective, season 1. The environmentally friendly Arlene Meraux River Observation Center, which was dedicated earlier this year, offers sweeping views of the river, community meeting spaces and classrooms, rounding out the property’s capabilities. 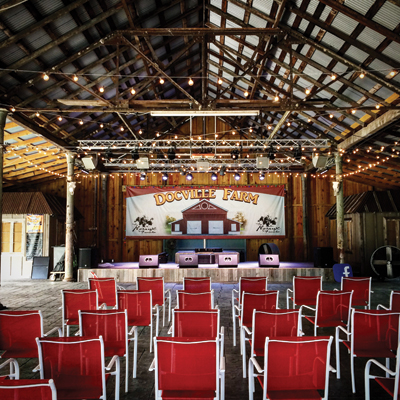 “It was established in 1925,” says board member Chris Haines during a Slowfood New Orleans boucherie event in September. Haines is the nephew of Arlene Meraux, who set up the Arlene and Joseph Meraux Charitable Foundation as a private family foundation to go into perpetuity. His brother Bill Haines is also a member of the board of directors. “It was part of the Story Plantation, which raised indigo.”

Haines says over the decades the farm was everything from a cattle farm to a cane farm before becoming a pecan farm. In 2005, about two months before Hurricane Katrina, via what can only be described as a lucky twist of fate, Haines says they got out of the cattle business.

“We started the foundation in order to try to improve the quality of life in St. Bernard,” said Haines. “We dedicated 130 acres to community outreach, to make St. Bernard a destination and hosting community and charitable events.”

Conservation also is at the heart of the foundation’s mission. According to its public relations spokesperson, Todd Ragusa, the foundation manages, maintains and preserves levee-protected lands, pastures, woodlands, canals, water bottoms, battures, bayou-ridge sites and non-levee wetlands and marshes and historic structures and sites, to name a few.

One of the historic structures preserved by the foundation is the Dave Thompson Event Barn. The original circa-19th century structure was located in the French Market in New Orleans until it was moved and reconstructed in the 1940s. Today, it’s the location for public events such as the free Blues in Da Parish blues festival and AgMagic on the River. Other events held at the farm include the Sugar Fest in October. In January 2016, the National Pig Veterinary School will hold a private workshop, and in March, the foundation is hosting the annual Working on the Water Summit (which works with coastal communities impacted by the Deepwater Horizon BP Oil Spill) and a New Orleans Entrepreneurs Week startup contest to encourage businesses to come to St. Bernard.

The sense of place, community and preservation at Docville Farms is evident from the first moment you set foot on the land. To learn more about the historic property and the Meraux Foundation, visit merauxfoundation.org