With his rock star persona, tattoos marking culinary milestones, penetrating eyes and an easy laugh that obscures an indefatigable, serious work ethic, Chef Ryan André is at the top of his game at Soji Modern Asian in Baton Rouge.

“We wanted to create a unique, high-energy place that offers something new to Baton Rouge,” said André.

Instead of offering the typical Asian-American fusion that prevails, André’s menu is a multi-national mosaic, in which each offering retains its regional integrity.

The hip gastronomic gladiator from Gonzales seduces with edible art and flavors that can cause your eyelids to lower in quiet euphoria, from the deep, primal succulence of Korean ribs to fiery Thai drunken noodles and complex ramen bowls that emulate the many shades of sweet, salty and spicy gleaned from a dozen Asian countries.

It came as no surprise when Soji was named Best New Restaurant for 2019 and André was named Best Chef by 225 Magazine’s Best of Baton Rouge awards, a title he also won in 2017 leading City Pork Brasserie.

Recruited from the Louisiana Culinary Institute by mentor Chef Tory McPhail for a seven-month stint at Commander’s Palace in New Orleans following hurricane Katrina, the tastemaker’s tipping point ensued when André returned to Commander’s for a second transformative stretch before opening Le Creole in 2010.

“I was commuting back and forth from Baton Rouge for school and working at Commander’s until midnight,” he said. “A lot of my drive comes from putting my head down and working hard. It remains my work ethic.”

A restless perfectionist with an ongoing quest for new flavor profiles, André returns to Thailand this summer.

“When I visited Thailand in 2018, I was amazed at the street food and discovered over 20 to 30 distinctly different soy sauces from various regions,” he said. “I’m returning in July for my 40th birthday. It will keep me on my toes. Being challenged is my passion.” 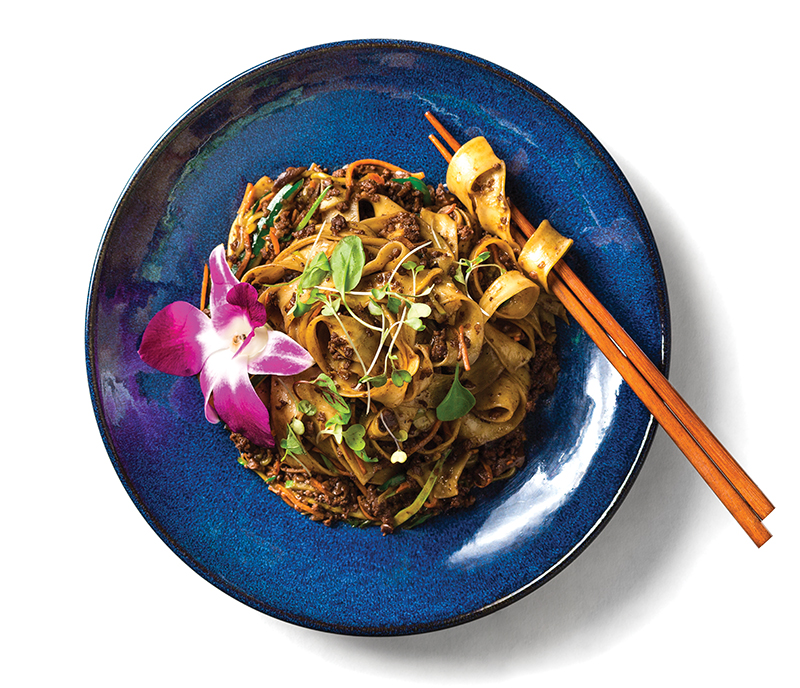 Reduce sauce to a simmer and cover. Cook for 15 minutes, stirring occasionally to keep from sticking. Remove lid and toss in cooked noodles. Cook for another 2 minutes to heat noodles.