Before Hurricane Rita washed me out of it, I lived on a small bayou that emptied into Vermilion Bay. I knew shrimp season was about to open when I heard my neighbor tuning up the engine on his boat, the “Osprey.” Willie was in his late 80s at that point, but he never missed the chance to go shrimping with his sons on opening day.

These days I only know that shrimp season has opened when I read it in the paper. But, like everyone else, I love shrimp. Unfortunately, it has become increasingly difficult to make a living as a shrimper. In part, that’s due to foreign competition, so it’s important to buy only local shrimp. Louisiana shrimpers need all the help we can give them.

Five of the recipes this month are for shrimp and two are for Gulf fish. The recipe for Shrimp and Guacamole Tostadas combines America’s favorite seafood with guacamole, a preparation that Americans also love. Tostadas are fried corn tortillas, which are widely available in grocery stores. Preparing the dish is as simple as boiling some shrimp and making guacamole. Each diner can construct his or her own tostadas by spreading the fried tortillas with guacamole, adding shrimp and topping them with sour cream. It’s great do-it-yourself party food.

We all know shrimp salad made with mayonnaise, and it can be very good, but this shrimp salad recipe uses a vinaigrette of olive oil, lemon and mustard as the base. It also includes spices, capers, green olives, green onions and sliced radishes. It’s a very different type of shrimp salad and a nice change of pace.

If you want a more traditional shrimp salad, try the recipe for shrimp burgers, which are toasted hamburger buns filled with a mayonnaise-based shrimp salad and dressed with lettuce and tomato. For those who’ve eaten a lobster roll in New England, the similarity will be obvious.

The recipe for linguine with shrimp is another adaptation of a favorite dish, linguine with white clam sauce. This is an easy and quick preparation that is loaded with flavor. Usually Italian pasta dishes made with seafood don’t include cheese, but I tried this both ways and found that I much preferred it with freshly-grated Parmesan. When this issue comes up, I am reminded of my experience in a New York Italian restaurant years ago. After I ordered a seafood pasta, the waitress and I discussed whether it should be served with Parmesan. Her take: “The chef says no Parmesan, but when he eats it, he adds Parmesan.” So there.

Everybody loves fried shrimp, and with good reason, but sometimes we need to take a break from deep-fried food. The recipe for oven fried shrimp isn’t likely to top your affection  for fried shrimp, but it produces a very crisp and tasty alternative. The Japanese-style bread crumbs called Panko are the reason.

Flounder is one of my favorite fish. A whole broiled flounder is a special treat, but whole flounders are hard to come by. Flounder fillets are delicious and easy to prepare. Pan frying is a great way to cook them. If you have clarified butter, use it, but otherwise use half butter and half oil. Whole butter by itself will burn, but mixing it with oil prevents that. Once the fish is fried, I like it with nothing more than a squeeze of lemon.

Anyone who loves seafood must love speckled trout. It’s a wonderful Gulf fish that can be prepared in a variety of ways. Here it’s broiled with butter and white wine and then the pan juices are reduced and whole butter is whisked into them to create a rich sauce that does justice to a noble fish. 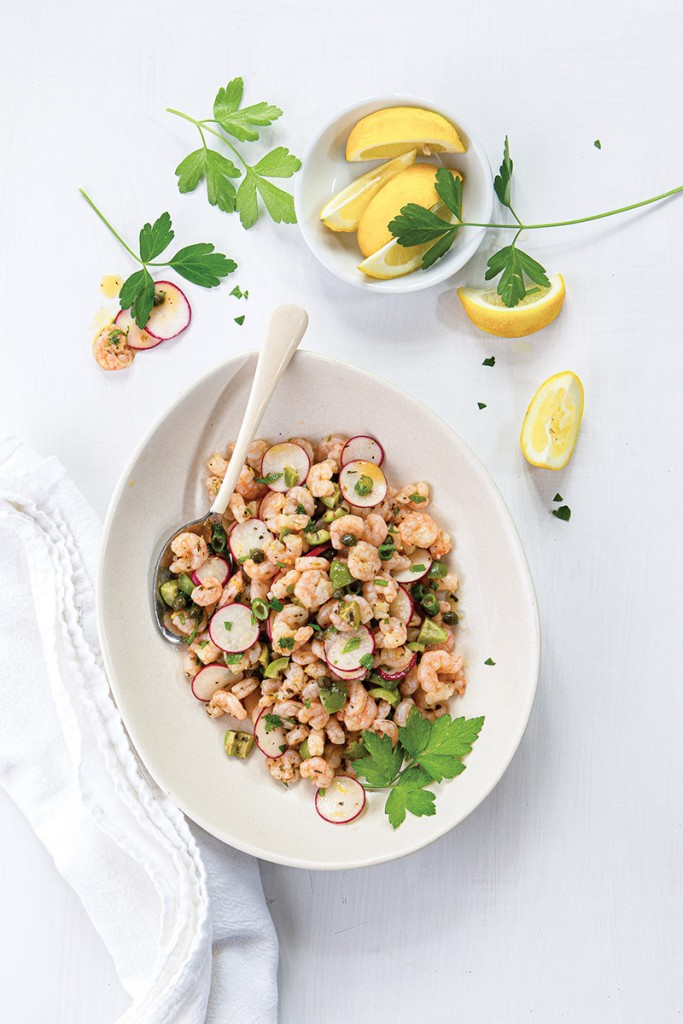 Put shrimp and Cajun/Creole seasoning in a pot, cover with water and place over high heat. When it comes to a boil, remove from heat, cover and leave shrimp in water for one minute. Drain and cool.

In a bowl, combine olive oil, lemon juice and mustard and whisk to form an emulsion. Add thyme and lemon zest and whisk. Add cooled shrimp, capers and olives and stir to combine. Season with salt, black pepper and cayenne. Add parsley, onion tops and radishes. Serves 4 or more.

Preheat broiler. Brush a rimmed pan suitable for the broiler with butter. Place fillets on pan and brush them with butter. Pour wine over fillets. Sprinkle with Cajun/Creole seasoning. Broil until fish flakes easily with a fork (timing will depend on thickness of fillet).

Add equal amounts of butter and oil to frying pans to a depth of about ¼-inch and place over medium-high heat. Sprinkle fillets with Cajun/Creole seasoning. Dredge fillets in flour, shake off excess and add to hot pans.

Cook until browned on one side, then turn and brown on the other side. Using a slotted spatula, transfer fillets to warm serving plates. Sprinkle with chopped parsley and serve with lemon wedges. Serves 4. 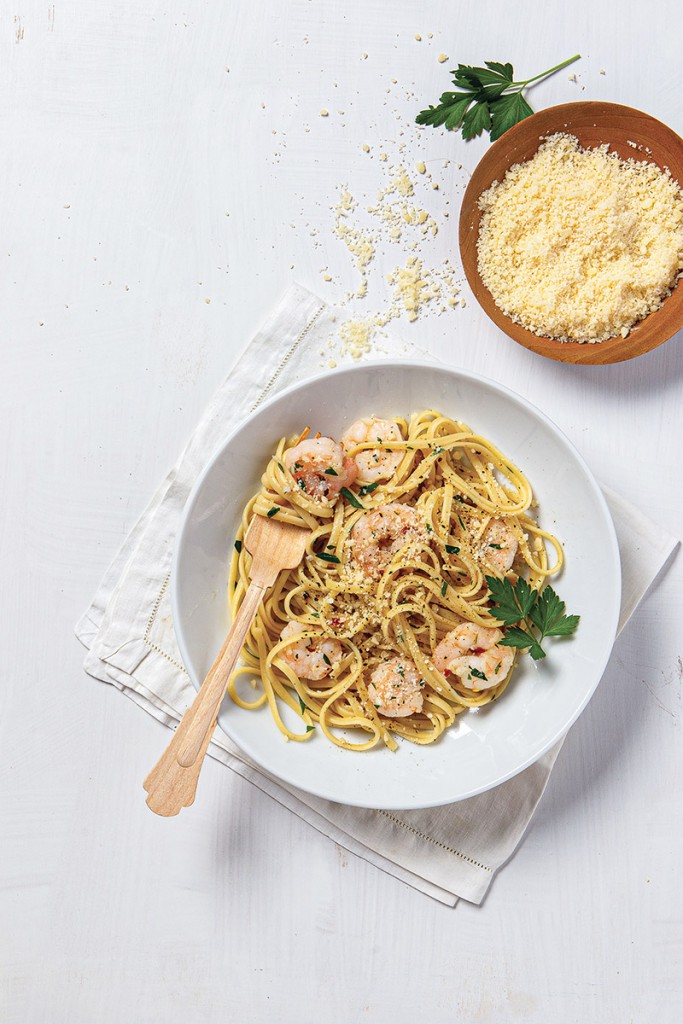 Cook linguine in salted boiling water, according to package instructions, until al dente.

Meanwhile, in a large, nonreactive skillet or pot, combine shrimp, olive oil, garlic, crushed red pepper and wine. Bring to a boil and cook until shrimp turn pink. Reduce heat to a simmer. When linguine is ready, drain in a colander, reserving some of the cooking water.

Add linguine and butter to shrimp and toss to combine. If needed, add some of the pasta cooking water to make a sauce. Season to taste with salt and pepper. Turn linguine and shrimp into a warmed serving bowl. Add Parmesan and parsley and toss to coat. Serves 4.

Peel and devein shrimp, leaving the tail section intact. Preheat oven to 450 F and line a large baking sheet with parchment paper. Combine flour and Cajun/Creole seasoning in a shallow container, such as a pie pan. Place eggs in a shallow bowl and beat lightly. Place Panko bread crumbs in another shallow container. Holding a shrimp by the tail section, dredge in flour, dip in egg, dredge in bread crumbs and place on the parchment-lined baking sheet. Repeat with the remainder of the shrimp. Bake until shrimp are browned, about 10-12 minutes. Serves 4.

Place shrimp and Cajun/Creole seasoning in a pot and cover with water. Bring to a boil over high heat. Turn off heat and cover pot. After 2 minutes, turn shrimp into a colander to drain. When cool enough to handle, peel and devein shrimp.

When ready to serve, toast buns. Spread toasted buns with mayonnaise. Add lettuce and tomato slices to bottom half of buns. Divide shrimp mixture among the 4 buns. Season to taste with salt, pepper and hot sauce. Add the top half of buns. Serves 4.