Okra might just be the most divisive vegetable in the South, but if you love it here are some recipes to try 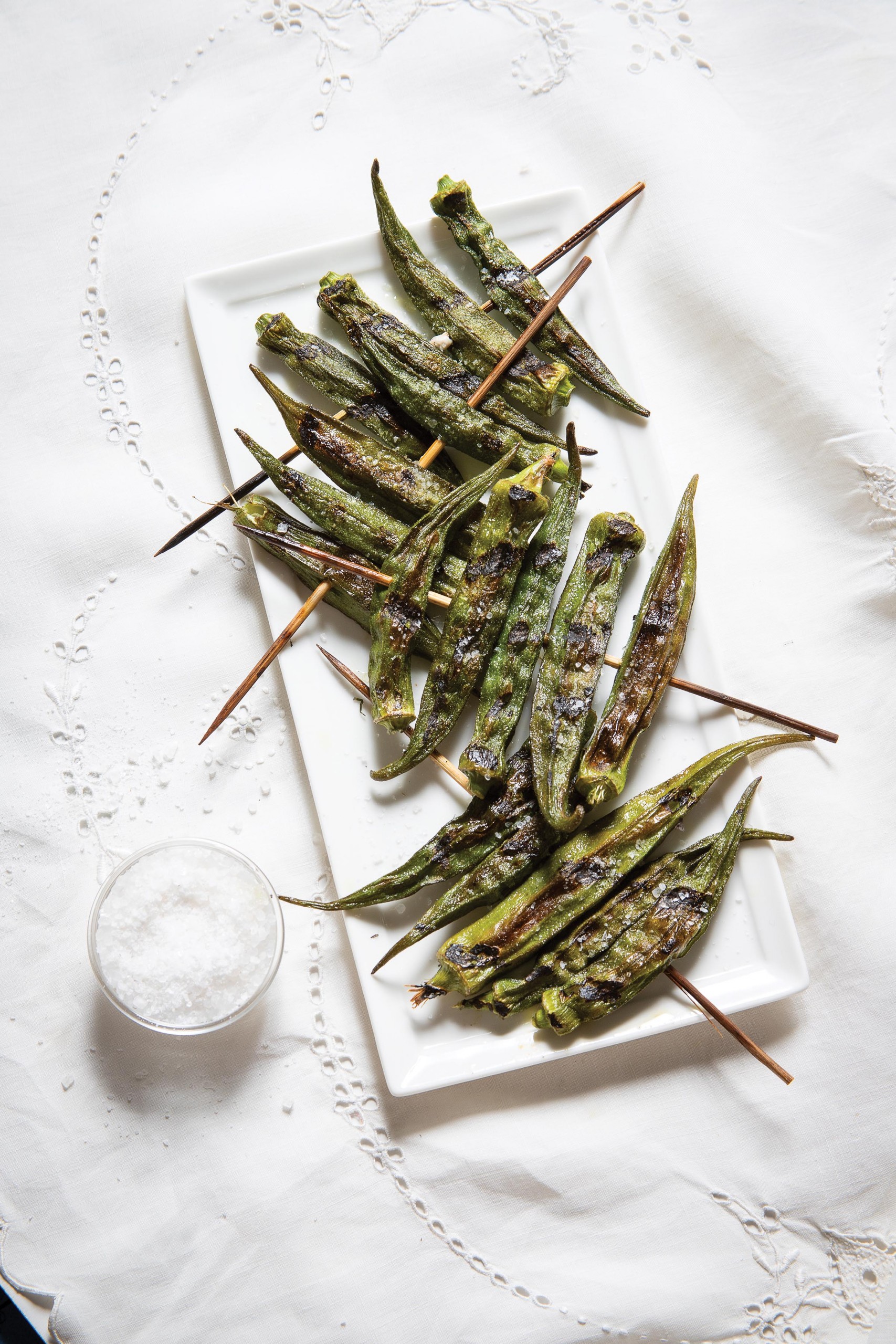 Tip
If your grill doesn’t have large spaces between the bars, you can cook the okra directly on the grill without fear of it falling into the fire. Otherwise, use a finer-meshed grill tray or basket on top of the grill. Another option is to insert two skewers into the okra.

Bring up the subject of okra, and you might as well be talking politics. There is no middle ground. You either love okra or you hate it. The haters usually cite okra’s mucilaginous texture as the reason, but they use the word “slimy” to describe it, which is prima facie evidence of prejudice.

Here in Louisiana, okra is forever associated with gumbo, where it is magical, but okra, a native of Africa and a member of the mallow family (along with hibiscus), can be prepared in many other ways and is a mainstay of southern cooking. Okra is not as popular in other parts of the country, to say the least, but it is loved in Africa, the Middle East, India, Pakistan, Turkey, Greece and the Caribbean.

Okra has an affinity for tomatoes, onions and garlic and is frequently combined with them in gumbos, stews and the like, often with shrimp or chicken. Okra is also delicious with pork, sausage or lamb. Rice is a traditional accompaniment in Louisiana, but dishes combining okra, tomatoes and potatoes can be delicious.

Fried okra often appeals to those who dislike it prepared any other way. Sometimes okra is coated in a batter and deep fried, but it is far better dredged in cornmeal and pan fried. I once had an appetizer of both okra and sliced green tomatoes prepared that way, and it was an inspired combination that would probably make a delicious po’boy.

Most okra recipes call for sliced okra, but sometimes the whole pod is used. One of those preparations involves steaming whole okra on top of field peas. Now that’s a southern dish that cries out for cornbread. For a very quick and delicious snack, steam small okra pods for a few minutes and eat them sprinkled with vinegar and salt.

One of the recipes this month is for a shrimp, crab and okra gumbo that can be made in under an hour. The dried ground shrimp are not essential, but they add a lot of flavor. If you want to turn the recipe for smothered okra into a meal, add some smoked sausage. If you have leftover pork from another meal, you can substitute it for the pork stew meat called for in the recipe for pork stewed with okra and tomatoes. The homestyle okra and the grilled okra are two simple and tasty preparations.

Coat okra with olive oil and cook on a hot grill, turning it as needed, until okra is softened and browned all over. Season with salt. Makes 4 or more servings.

Cook onions and garlic in olive oil until softened, about 5 minutes. Add okra, tomatoes and chicken broth. Simmer, stirring occasionally, until okra is tender, about 30-40 minutes. 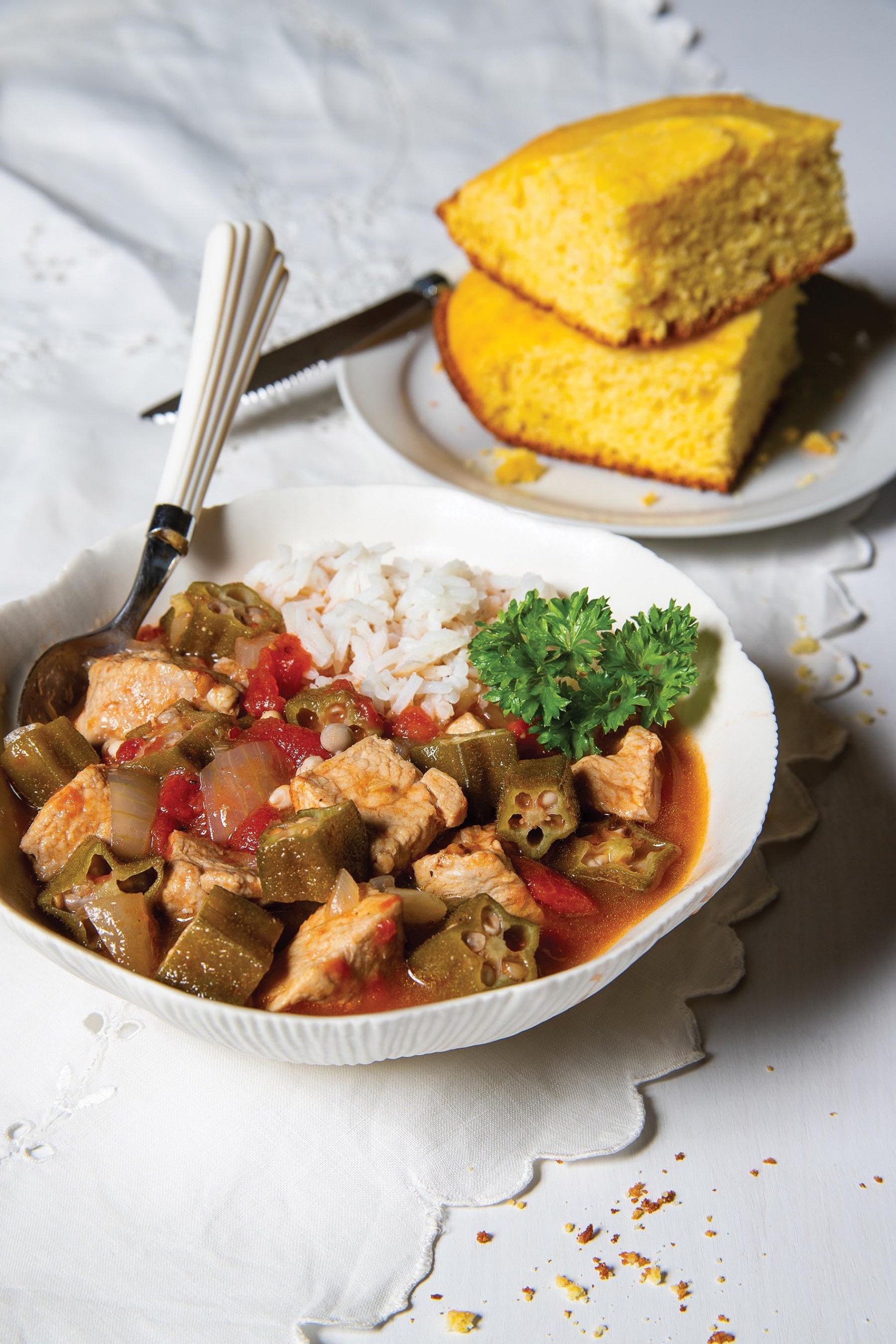 Season pork with salt and pepper. Add olive oil to a heavy casserole or dutch oven over medium heat. Add pork and brown on both sides. Add onion and garlic and cook until softened, stirring occasionally. Add tomatoes, chicken stock and okra. Bring to a boil, cover and simmer until pork is cooked through and okra is tender, about 45 minutes.

Cook onion and bell pepper in oil until softened, about 5 minutes. Add stock, tomatoes, okra and dried ground shrimp. Bring to a boil, reduce heat and simmer, stirring occasionally, until okra is tender, about 30-40 minutes.

Add cornmeal and cook, while stirring, to toast cornmeal. Season to taste with salt, black pepper and cayenne. Makes 4 servings.