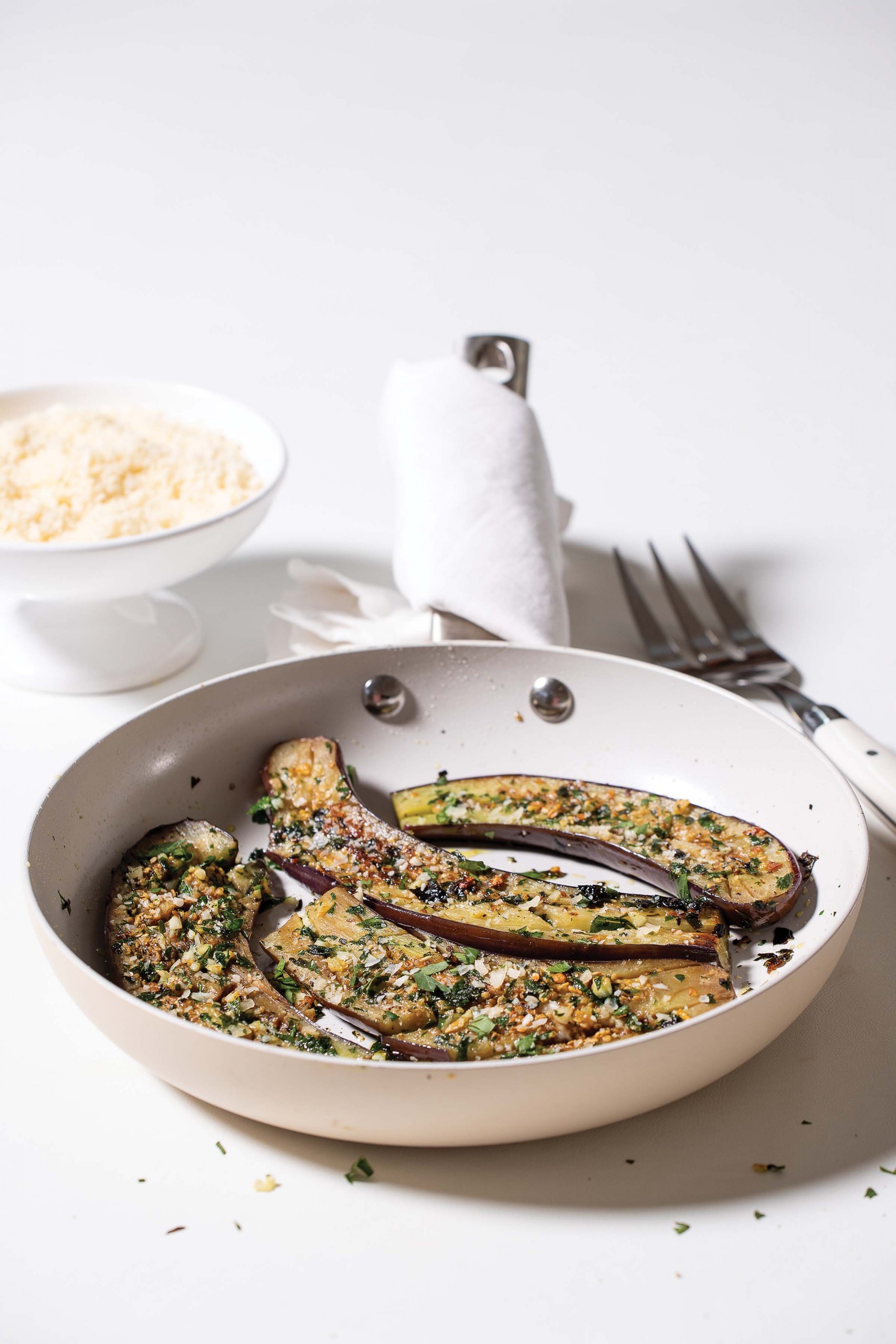 Eggplant With Garlic, Parsley And Parmesan

Trim stem ends of eggplants. Cut in half lengthwise, then cut each crosswise. You will have 8 pieces. Cut a crosshatch pattern on each piece without puncturing the skin. Combine chopped garlic and parsley and press into the cuts.

Heat olive oil in a large skillet until it shimmers. Add eggplant, cut side down, and cook on medium heat until browned. Turn and cook briefly on other side, adding more olive oil, if needed. Transfer to a serving platter and season with salt and pepper. Sprinkle with grated Parmesan. Makes 4 servings.

One of the earliest Louisiana eggplant recipes ppeared in La Cuisine Creole, published in 1885. The book was written anonymously by Lafcadio Hearn, who feared that having his name attached to a cookbook would detract from his reputation as a serious journalist. His recipe calls for parboiling the eggplant, slicing it, dipping it in egg, then cracker meal and frying it in lard. He says the fried eggplant tastes like soft shell crabs.

In the popular mind, eggplant is most readily associated with Italian cuisine, but in American cooking its roots go back to Africa. A project at the University of South Carolina called American Heritage Vegetables has this to say: “Over the 19th century the eggplant insinuated itself into the taste of the Americans. At the beginning of the century, only white and Black southerners ate it readily, calling it Guinea Squash in token of its West African genesis. They tended to eat the West African way — battered and fried in fat.”

Frying is still a popular preparation, but since eggplant is such a versatile vegetable we can cook it in a variety of ways and serve it as an appetizer, a vegetable or a main course. We enjoy it in dishes as diverse as eggplant caviar, caponata, baba ghanoush, moussaka, ratatouille, eggplant dressing, eggplant parmigiana and eggplant stuffed with shrimp or ground meat. Eggplant has an affinity for tomatoes and garlic and is often combined with them.

The recipes this month are all quick and easy to prepare. The sandwiches are made of eggplant in place of bread, with fresh mozzarella as the filling. Serve them with a tomato sauce of your choosing and garnish with fresh basil. Long, thin Asian eggplants are split, scored and the cuts are filled with chopped garlic and parsley. They are then sautéed in olive oil. Fried eggplant gets a bracing addition of anchovies and capers. The gratin is composed of fried eggplant and Parmesan with a topping of breadcrumbs, garlic, parsley and olive oil.

And what about Lafcadio Hearn’s fried eggplant that tasted like soft shell crabs? Well, I prepared it according to his directions, omitting the parboiling, and frying it in vegetable oil rather than lard. While it would be a stretch to say that it tasted like soft shell crabs, there was a textural similarity. The eggplant was crunchy on the outside, creamy within and entirely delicious. I plan to make it again.

Tip
“Few foods can lay claim to causing insanity, acting as an aphrodisiac, and serving as a dental cosmetic. Eggplant, Solanum melongena, lays claim to all of the above and much more. Although most often considered a vegetable, eggplant is actually a fruit.” — The Oxford Companion to American Food and Drink

Fried Eggplant With Anchovies And Capers

In a large skillet, add about 1/3 inch oil and heat until oil shimmers.

Cut eggplant into ½-inch slices. Dredge eggplant slices in flour, then in egg, then in breadcrumbs. Fry, in batches, until browned on one side, then turn and brown other side. Drain and sprinkle with salt and pepper. Serve garnished with anchovies, capers, chopped parsley and lemon wedges. Makes 4 servings. 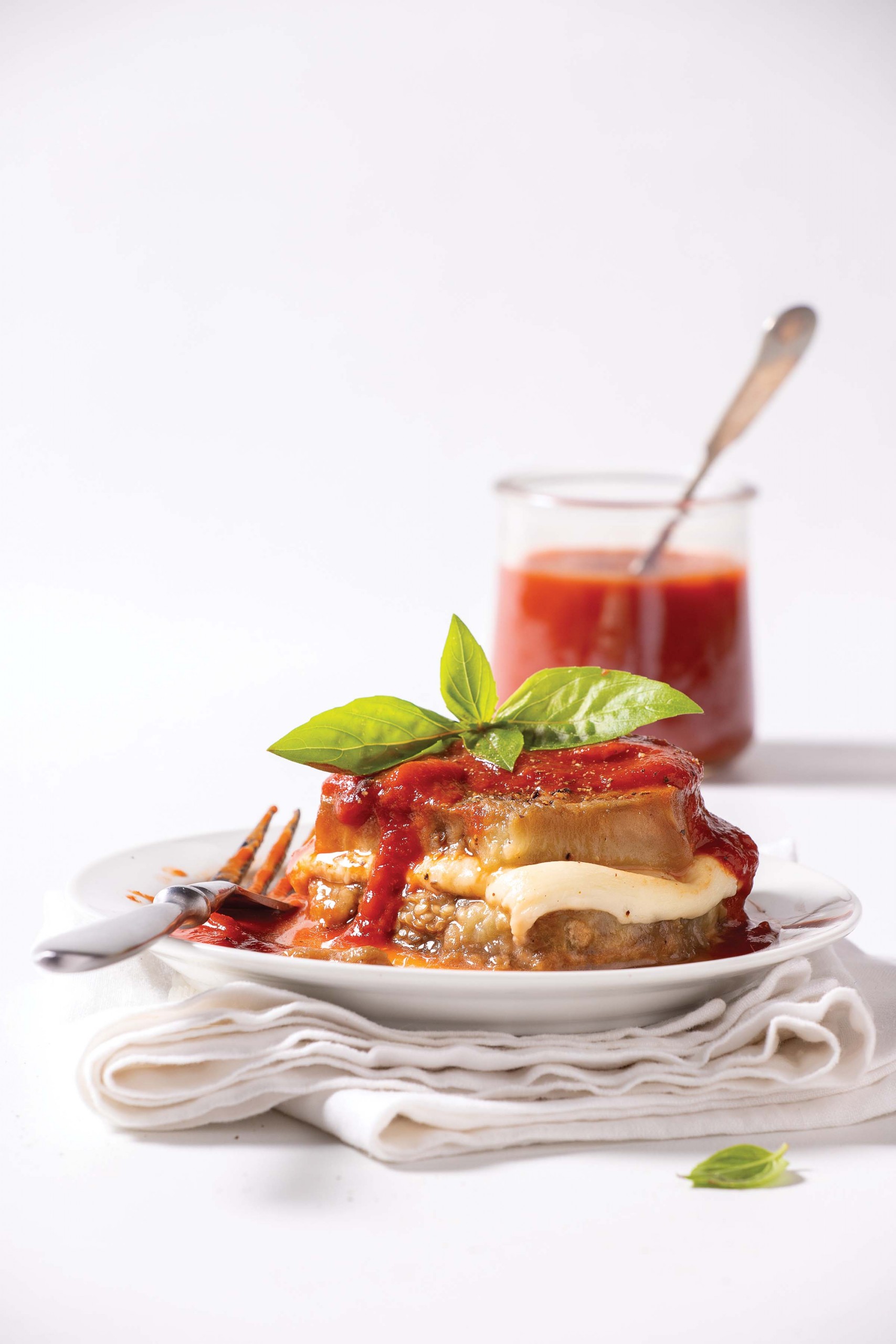 Preheat broiler. Cut eggplant into ½-inch slices and place on a baking sheet. Brush both sides with olive oil and season with salt and pepper. Broil until browned, then turn and broil other side.

Place a slice of mozzarella on half of the eggplant slices. Cover with the remaining eggplant slices to form a sandwich. Return to the oven just long enough to melt the cheese. Serve with tomato sauce and garnish with fresh basil. Makes 4 or more servings.

Place skillet over medium-high heat and add enough eggplant to cover the bottom. Cook until browned, then turn and brown the other side. Transfer eggplant to baking dish, season with salt and pepper and sprinkle with some of the Parmesan. Repeat with remaining eggplant until all are cooked, adding a little oil to skillet, as needed. Layer eggplant in baking dish and sprinkle with Parmesan. Combine garlic, parsley and breadcrumbs and sprinkle over the top of the dish. Drizzle with olive oil. Bake until top is browned, about 15 minutes. Makes 4 servings.

Tip
“Eggplant, as it is known in America and was once known in Britain, is so named because the earliest variety to arrive in England in the 16th century was small and white, similar to a hen’s egg. Today, eggplant is available in countless shapes and colors.” — The Oxford Companion to American Food and Drink