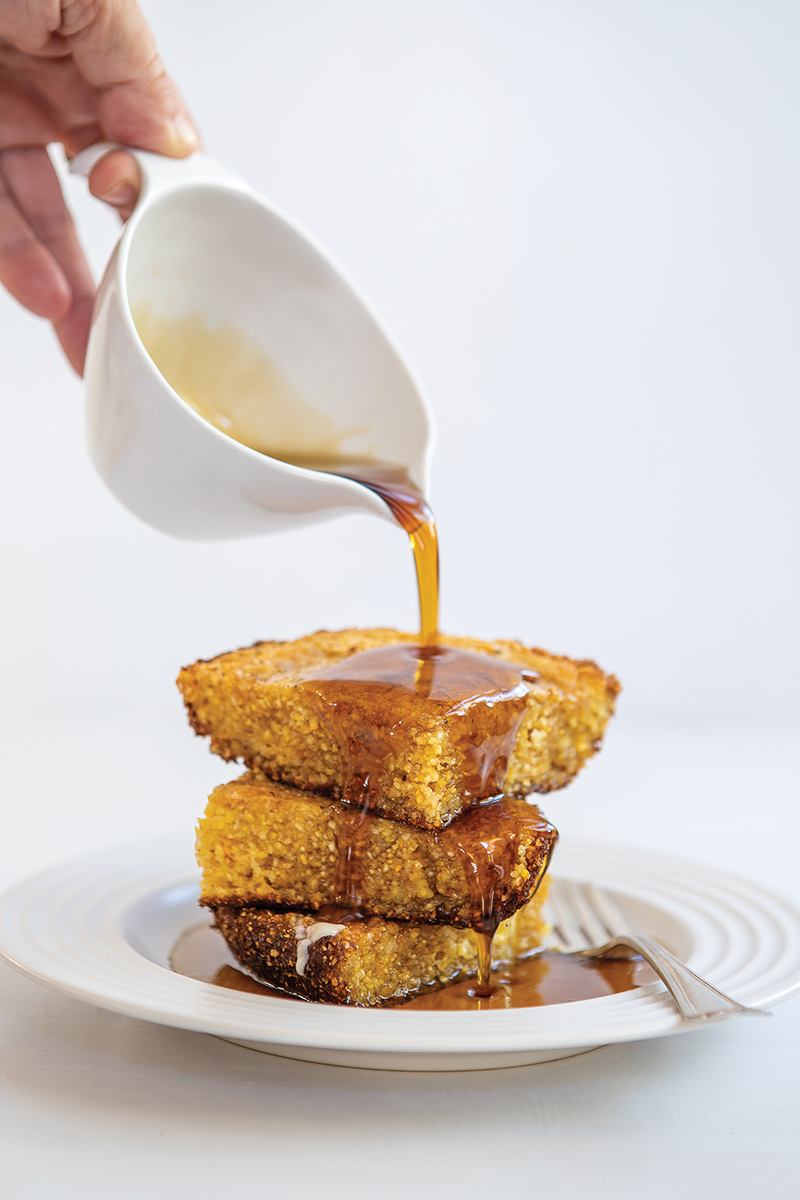 Cane syrup, once known as New Orleans syrup, is a product particularly associated with Louisiana. Historically, it was a sweetener made on small family farms by grinding sugarcane and boiling down the juice to make syrup. During World War I, the government encouraged the use of cane syrup and molasses as part of a voluntary sugar rationing program, but the widespread marketing of Karo in the 20th century led to the dominance of corn syrup as a liquid sweetener. It is one of the great southern ironies that pecan pie, as regional a dish as one could imagine, is usually prepared with syrup made from corn grown in the Midwest instead of cane syrup, which is made in the South.
There are other producers of cane syrup, but the principal one is the C.S. Steen Syrup Mill in Abbeville. According to the company’s website, Steen’s got its start in 1910, when the founder salvaged his cane crop from an early winter freeze by making syrup. Cane syrup is used as a table syrup and in a variety of baked goods, including gâteau de sirop, the Cajun syrup cake. It can also be used in savory dishes and is particularly good with fresh or smoked pork.

This month’s recipes utilize cane syrup in a variety of ways. Several recipes for gingerbread appeared in the the first American cookbook, published in 1796, and two early Louisiana cookbooks, both published in 1885, continued the tradition. The variety of gingerbreads and the ingredients from which they are made are truly staggering. My version, made with cane syrup, spices and coffee, is a dense, strongly flavored cake that is at its best when thinly sliced, spread with softened butter and enjoyed with a cup of black coffee.

The recipe for pecan pie is fairly traditional except for the use of cane syrup in place of the usual corn syrup. When there’s no pecan pie, a satisfying dessert, snack or breakfast can be put together with cornbread, butter and cane syrup. This recipe, made in a cast iron skillet, produces cornbread with a dark brown crust that bakes in 15 minutes.

Cane syrup goes well with pork, as in the recipe for boneless pork chops served on a bed of arugula and drizzled with a vinaigrette of olive oil, cane vinegar and cane syrup. This simple dish has the added advantage of being quick to prepare.

Tip
To get a dark brown crust on your cornbread, the cast iron skillet must be extremely hot when the batter goes in. Use oven mitts or thick pot holders and be extremely careful when handling the hot skillet.

POUR vegetable oil in an 8-inch cast iron skillet, place on the lowest rack in the oven and preheat to 450 F. 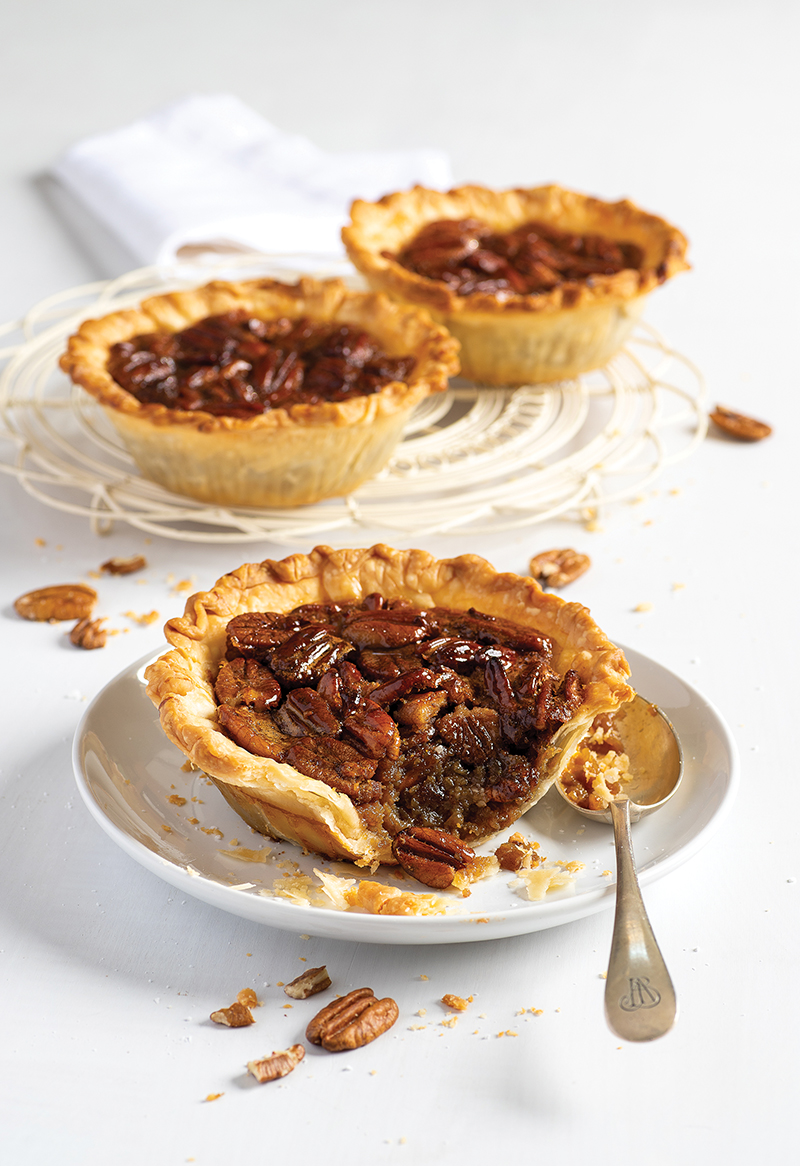 TO MAKE CRUST, combine flour and salt in mixing bowl. Cut butter into small pieces and mix into flour with a pastry blender, two knives or your fingers until mixture is like coarse meal with pea-sized clumps of butter. Add water, one tablespoon at a time, until dough begins to come together. Turn out onto a lightly floured surface, knead a few times, form into a disc and wrap in plastic wrap. Refrigerate for at least an hour before proceeding.

PREHEAT oven to 425 F. Roll out crust and fit into a 9-inch pie pan. Trim off excess and fashion edge as desired.

IN A MIXING BOWL, beat eggs with a wire whisk until well mixed. Add brown sugar, cane syrup, vanilla, salt and melted butter and whisk to combine. Stir in pecans. Pour filling into crust and place on a rack in the lower third of oven. Reduce heat to 325 F and bake until filling is set and crust has browned, about 40 minutes. Cool pie on a wire rack. Makes 8 servings.

IN A STAND MIXER fitted with paddle (or with a hand mixer), beat butter and sugar until smooth. Add eggs, one at a time, mixing well after each addition. Add cane syrup and mix. (Mixture will appear curdled at this point.) Add dry ingredients and mix, scraping down bowl as needed. Add coffee and mix to incorporate.

TURN into prepared pan and smooth top with a rubber spatula. Bake in preheated oven until a toothpick inserted near the center comes out clean, about 40 minutes. Transfer pan to a rack for 10 minutes, then turn out gingerbread.

GENEROUSLY SEASON pork chops on both sides with Cajun/Creole seasoning. Divide arugula among 4 dinner plates. Add 1 tablespoon olive oil to a large skillet and place over medium-high heat. Combine remaining olive oil, vinegar and cane syrup in a bowl or measuring cup and whisk to combine. Add pork to skillet and cook until browned, then turn and brown other side. Place each chop on top of arugula. Whisk vinaigrette again, add to hot skillet, scraping up any brown bits, and drizzle over the pork and arugula. Makes 4 servings.